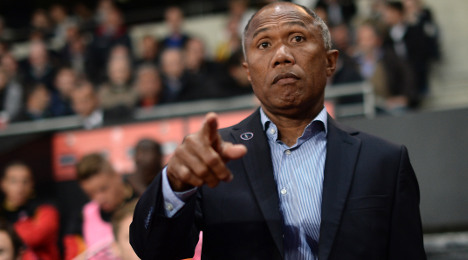 Former PSG coach Antoine Kombouare will be hoping for revenge when his Lens side takes on his old club on Friday. Photo: Jean-Sebastian Evrard/AFP

Paris remain unbeaten this season but six draws in their opening nine games left them in third place over the international break, seven points behind Marseille.

Standing in their way this weekend are Lens and coach Antoine Kombouare, who won a host of honours with PSG as a player in the 1990s and then coached the capital side for two-and-a-half years before being unceremoniously sacked in December 2011 with the team top of the league.

Kombouare would dearly love to get one over his old side, but a Lens win would be a huge shock.

While PSG have become one of Europe's wealthiest clubs under their Qatari owners, Azerbaijan-owned Lens are plagued by huge financial problems and have not been able to sign any new players since winning promotion in the summer.

In addition, refurbishment work at their Stade Bollaert-Delelis means they must play home games elsewhere, so this weekend's match has been moved nearly 200 kilometres to the Stade de France, in the Paris suburb of Saint-Denis.

A crowd of around 60,000 is expected for the first Ligue 1 game to be played at the national stadium since 2009, but only a minority will be backing a Lens side in the relegation zone

"I don't like the way we have to work here, I am frustrated, especially for the competitor that I am," said Kombouare.

"But we are in Ligue 1 and I have a motivated group of players. We mustn't forget that we are playing at home, even if it will be in Saint-Denis.

"I hope we don't get thrashed, but frankly we have a lot to lose. PSG will wake up soon, so we need to hope that they don't wake up against us."

Kombouare admitted that he must put any feelings for his old club to one side.

"I would have liked to have stayed but it in some ways it was a relief to leave. I will always be grateful to PSG and will always be a big fan of the club," he said.

"But now we have a game to play and three points to go looking for, so there will be no room for sentiment." Injury worries

Paris coach Laurent Blanc continues to sweat over the fitness of Zlatan Ibrahimovic (heel) and Thiago Silva (thigh), and while the latter has returned to training after two months out, he remains a doubt for this weekend.

With Marquinhos out and David Luiz picking up a thigh injury playing for Brazil, the champions have problems in defence with a trip to face APOEL in the Champions League to come next Tuesday.

On Sunday, Marseille host Toulouse at the Stade Velodrome chasing an eighth consecutive win. The focus there will be on Andre-Pierre Gignac, the former Toulouse striker who is currently the leading scorer in Ligue 1 and starred in France's friendly win in Armenia in midweek.

Second-placed Bordeaux host Caen, while fourth-placed Lille host Guingamp looking for a boost before they face Everton in the Europa League.

On Saturday, Monaco will be without the injured Dimitar Berbatov as they entertain Evian, who have won three in a row.

Leonardo Jardim's side are 13th in the table, and while they have claimed respectable draws with Zenit St Petersburg and Paris in their last two outings, they could find this match more complicated.

"This season, we have played well against teams who attack and defend at the same time and leave space for us to construct," said Jardim.

"It is harder when our opponents close down the space, sit deep and look to hit us on the break. Especially if they score first."