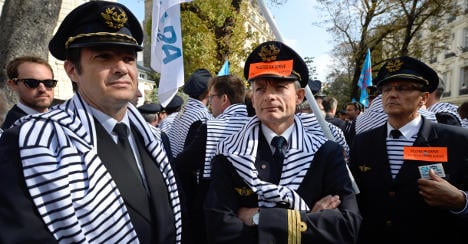 Air France pilots have reached a deal with the airline but will it prevent strikes in the future? Photo: AFP
In what must be a relief to Air France's stock holders and customers, the airline's largest pilots' union and management have come to an agreement over the main point of contention for the costly two-week strike in September, thus potentially ending the labour battle.
But it looks like no one really came out a winner, with union SNPL and Air France each getting some of what they wanted prior to the two-week strike in September that cost the airline €500 million.
Air France has agreed to completely scrap its original plan to expand its low-cost brand Transavia via the creation of hubs in Germany and Portugal, which pilots feared would open the door to the undermining their contracts in France.
The pilots, some of whom earn up to €250,000 per year, were worried their flights could be replaced by Transavia services or that the company would seek to use Transavia pilots who are paid much less.
But Air France didn't lose out entirely in the agreement.
France's flagship carrier did not give in to the pilots' demand that workers for Air France and Transavia have contracts with the same terms. The agreement struck on Thursday will allow a two-tiered labour contract.
“It’s a compromise,” Guillaume Schmid, an SNPL spokesperson told French media, but added that the union is “in support of the current agreement”.
The airline sees the development of Transavia France as crucial to compete in the cut-throat world of aviation which has been revolutionized by the arrival of low-cost operators like easyJet and Ryanair.

Only time will tell to what extent the project will be hindered by the strike and the agreement brokered this week by both sides.

It's also important to note this agreement must still be approved by the pilots who were to be briefed on it on Friday and are expected to take a vote on it in mid-November.

SNPL says it has no "no idea" which way the pilots will go, especially because "they are coming out of a strike that had a high level of participation and some were very passionate," the union said.

For its part Air France is convinced the agreement will be ratified by the the pilots.

With the vote just two weeks away, we'll know soon enough who is right.