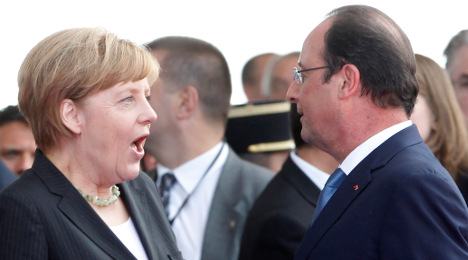 German Chancellor Angela Merkel said on Thursday she was confident that the European Union would enforce its own budget rulebook with debt sinners, as France faced a reckoning in Brussels.

Speaking to parliament, Merkel noted the entire EU had signed up to the Stability and Growth Pact regulating fiscal discipline.

"All, and I stress here all, member states must fully respect the strengthened rules of the Stability and Growth Pact," she said.

"Only then can the Pact fulfil its purpose as the main anchor for stability and above all confidence in the eurozone.

Without mentioning France by name, Merkel said she was "sure" that the "current and future European Commission is aware of the primary responsibility that it bears for maintaining the credibility of the Stability and Growth Pact".

Paris announced last month that next year's budget deficit – the shortfall between revenue and spending – will hit 4.3 percent of annual economic output, far above the 3.0-percent ceiling set by the European Union for member states.

The deficit is not expected to drop to this level until 2017.

The European Commission, the EU's executive branch, has two weeks to decide whether countries' budget submissions break the rules.The Commission has new powers to enforce the deficit limit, and could for the first time send the budget back to Paris for changes to a national spending plan.

Failure to reach a deal could alarm global financial markets and cause a political crisis at a time when Europe risks slipping into a triple-dip recession.

Germany is said to be working behind the scenes to give Paris a way to avoid disgrace, while also securing a far firmer commitment to reform, notably of strict rules controlling the labour market.