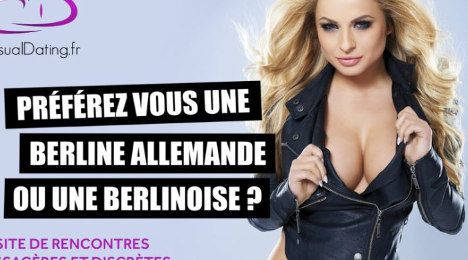 This ad from Casual Dating is in the line of fire of France's new online uprising against sexism. Photo: Casual Dating

The site Macholand which went online on Tuesday, allows internet users to launch campaigns against sexist ads or statements, and encourage other “activists against sexism” to join the fray.

“It’s a tool for citizens to speak up against sexism and allows the voice of the people to be heard,” Clara Gonzales, one of the founders told The Local.

One example is a campaign against an ad by the dating company Casual Dating, which features posters of women being compared to cars, with captions such as “French women have nice bodywork, too” (see photo).

So far, nearly 1,300 people have joined the campaign against the ad.

To take part in the revolt participants can send a witty e-mail to the company criticising the offensiveness and sexism of the ad. The site is proving a success. After merely a few days, nearly 6,000 “activists against sexism” have joined the different campaigns, and the site’s Twitter page has nearly 2,500 followers.

The site has also had its problems and crashed on the first day due to the number of users.

One internet user, intent on adding fuel to the fire, left a comment saying the site crashed because it's "clearly more complicated to administrate a server than programming a washing machine”.

“We always laugh about the comments,” said Gonzales. “But they also mean that we are having an impact."

Gonzales says that they aren’t the only ones who have to deal with this kind of reaction.

"There are women fighting against sexism who are harassed and receive death threats all over the world," she said.

The founders would like their rebellion to go global and will offer their help and technology to anybody who wants to launch a similar site in other countries.

The fact that the site has proved so popular suggests that despite France carrying the word "égalité" in its motto, sexism remains an issue in the country.

The issue regularly flares up and it's often politicians who are at the centre of controversy.

Last year The Local reported how an male MP caused uproar in the French parliament when he made sexist clucking noises during a speech by a female Green Party MP. France's government spokeswoman blamed a parliamentary culture of "boozy dinners" for the outrageous behaviour.

A report by the education ministry in 2013 concluded that French schools encourage sexism by treating boys and  girls differently and forcing them into gender-specific roles.
Efforts undertaken to promote equality are often met with criticism. In May 2014, a stunt by schoolboys in Nantes caused outrage among conservative groups when the boys decided to wear skirts to school to fight sexism.
by Simone Flückiger