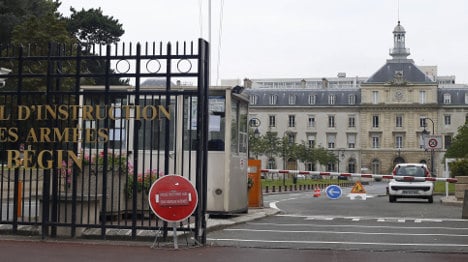 The hospital where the nurse is being treated. Photo: Thomas Samson/AFP

BACKGROUND: A nurse who authorities believe may be infected with Ebola was rushed to a Paris-area hospital on Thursday afternoon for tests and treatment after suffering from a "fever", French paper Le Parisien reported

If the woman, who has not been named, is confirmed to be infected with the disease that's killed over 4,000 people in Africa she would be the first person infected in France.Two other suspected cases in Paris in the last seven days, including one involving an American national, turned out to be false alarms.

Health authorities are worrie she could be infected because she treated the Doctors' Without Borders aid worker who arrived in France September 19th for treatment after contracting the disease while working at a hospital in Liberia.

The Doctors Without Borders nurse was subsequently cured of the illness during her stay at the Begin military hospital, to the east of Paris.

The military hospital is where the nurse was sent on Thursday afternoon for tests. It's one of over a dozen centres around France designated for treating Ebola patients in the case of an outbreak.

The hospital has a special isolation ward, where it is believed the nurse is being cared for. All other patients were evacuated from the emergency ward, before it was contaminated, Le Parisien states.

Blood tests are being carried out to confirm or rule out whether the nurse has the virus.

French Healthy Minister Marisol Touraine declined to comment on the potential new case, noting she would not speak about suspected Ebola infections until any were confirmed. After healthcare workers have fallen ill in the United States and Spain, French nurses raised fears that someone in their ranks would be next.

“In France professional nurses suffer from a cruel lack of information from the government, health authorities and hospitals,” said a statement from the nurse’s union SNPI earlier this week. “What do you do when a suspected case comes up?”

The French union leadership went on to note that nurses were entitled to very limited information during the scare around the H1N1 virus outbreak.

“Only doctors were entitled to specific information, the nurses did get any more information than the general public. We had to get by on our own,” said SNPI Secretary-General Thierry Amouroux in a statement.

“Worse, nurses are not even informed when their hospital is a designated treatment site.”