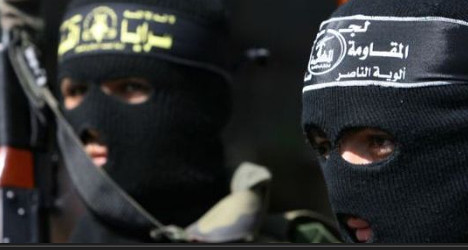 When officers got to the park they found at least six people “training for Jihad”, police sources told RTL radio this week.

The police had been called to the scene by local residents who had reportedly witnessed "bearded men dressed in djellabas" taking part in combat training in the park.

When officers pulled up they were greeted with cries of “infidels” according to French media reports.

The leader of the group told police they were training to “avenge the deaths of their Muslim brothers” before telling police they “would burn in hell”, RTL claimed.

One of the men involved later denied the men were trainee jihadists and insisted they were just taking part in a self-defence class.

According to a 35-year-old member of the group — a Muslim speaking on condition of anonymity — the man held was their self-defence teacher.

The man admitted his teacher had yelled "infidel" to police during a heated exchange, but denied that any of them had admitted they were training to join jihad in Syria.

"It was our first course, we hardly knew each other. We were doing some stretches, ran a few laps, practised body placement, punch-kick combinations," he said.

It was "simply a self-defence course with a trainer".

With no offense having been committed, none of the “apprentice jihadists” were arrested. A police source describing the incident as a simple “provocation”.

France’s anti-terrorist police the DGSI has taken control of the investigation.

Authorities in France are becoming increasingly concerned by the threat posed by “home grown jihadists”, hundreds of whom are suspected to be fighting in Syria and Iraq.

The French government is worried returning jihadists plan to carry out attacks in France and recently stepped up security at places like shopping centres and transport hubs.

The incident in Strasbourg comes in the same week that a video emerged of a French jihadist fighting in Syria calling on followers to “kill civilians in France”. The video, posted on the internet, has not yet been authenticated.

According to reports the man in the video speaks in fluent French, with a slight accent from the south of the country, calling for terrorist acts to be committed on French soil in the name of the extremist group Isis in revenge for French air strikes in Iraq.

Last month Isis called on followers to attack "dirty and spiteful" French citizens, which was followed by the kidnapping and beheading of French tourist Hervé Gourdel in Algeria.