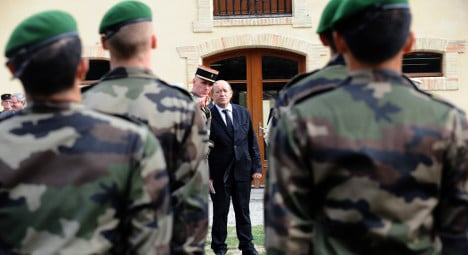 "In 2015, 7,500 jobs will be cut. The defence ministry will take part in the nation's efforts to improve its budgetary position," Defence Minister Jean-Yves Le Drian said

"The sovereignty of our country depends as much on tackling our public accounts as on our defence," he added.

The cuts come as France takes an active role in air patrols on Islamic State militants in Iraq although it has to date only announced two air strikes.

Paris also has troops in conflict-wracked Central Africa, Ivory Coast and continues to contribute to the international force in Afghanistan.

As part of the cuts, Le Drian also announced that the Val-de-Grace military hospital would be restructured, with its medical operations spread to two other Paris centres.

Val-de-Grace is famous for admitting high-profile patients and has treated ailing Algerian President Abdelaziz Bouteflika and Nicolas Sarkozy and Jacques Chirac when they were president of France.