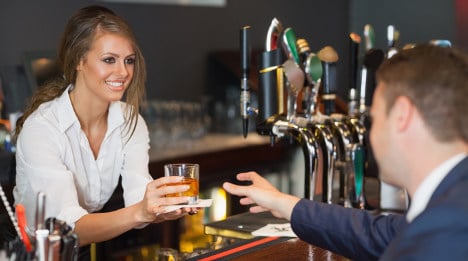 Seven reasons why you should work in a bar in France? Photo: Shutterstock

If you’ve only just arrived in France it can take a while to make new friends. Given you’ll be spending most of your time with them, your fellow bar staff will soon become your new buddies and family rolled into one and you’ll also be warmly welcomed by the general fraternity of bar workers in other pubs too.

And you might even make friends with customers too. In Paris the locals aren’t exactly known for their warm and welcoming attitude towards strangers but even Parisians have a tendency to loosen up after a couple of drinks, so working in a pub is an ideal opportunity to make connections that along the road may turn into actual friendships.

2. Brush up on your French

Job hunting in France without knowing at least the basics of the language can be rather daunting. But there are certain jobs out there that are perfect for new linguistically challenged arrivals and working in a pub is certainly one of them. For a start, speaking French isn’t necessary in order to score a job in most pubs, as most bar owners want native Anglos rather than fluent French speakers. Even once you start, you don't need to be daunted as most French customers will probably enjoy ordering in English.

Secondly, working in a bar will give you the perfect environment to practice your lingo. Knowing the words “demi” and “pinte” will be enough to start with but give it a few weeks/months and you’ll be able to interact with the locals sitting on the other side of the bar. Not many people can get by on a pub job in the UK these days but thankfully in France there is a decent minimum wage (€1.445.38 per month), which means if you land a full time job behind a bar, you should be able to survive, even in Paris. Many pubs may even pay slightly more than that.

And then there’s the tips. While the locals aren’t exactly big on tipping, there will always be the hordes of tourists from America, who love nothing better than popping into an Irish or Scottish pub on their trip to France. They will throw a few euros into the tip jar. The more sympathetic bartender might explain to Americans the true tipping culture in France, but the more clued-up ones probably won't.

Then there’s the fact, you’re working most nights, which means you’re not blowing your salary on getting drunk, plus if your pub has a kitchen, you'll get free meals. So not only does life in France suddenly become affordable but many young expats even find they can save money when working behind a bar. Drinking in France and particularly in Paris can be costly especially when you’re as thirsty as most young expats are. With pints soaring towards €10 in some pubs a young expat will soon find themselves out of pocket and probably heading home if they continue to drink they way they did back home. But working in a bar can offer a solution. If you stick to the 'I’ll scratch your back if you scratch mine' philosophy, you could save a lot of money. For example give fellow workers in other bars happy hour prices and they should respond in kind. You’ll soon have a list of bars where it will be cheaper to drink, although you'll probably find you never deviate from these venues ever again. You could also just drink from your own pub’s beer pumps (It has been known), when the boss is not looking but that'll probably get you sacked.

5. Enjoy Paris when everyone's at work

Working in a place that people turn to for their entertainment does have certain drawbacks. Starting a shift when everybody else gets off work can be a little frustrating, and it can be difficult to find time to hang out with friends and family who have different working hours. However, that also means you have time to yourself during the day that you can dedicate to experiencing everything France has to offer. You can go to the Louvre when there’s no queues or you can go swimming to the local pool without feeling you’re in a tiny fish bowl with lots of fish. And you can get a seat on the Metro. Few people are lucky enough to work in a place that provides a never-ending supply of potential love interests. Whether they need to be male or female, old or young, tall or short, blond or brunette, lean or mean, you’ll certainly come across a few customers that'll make the cut. Whereas in the UK the barman or barmaid is seen as the middleman, standing between you and beer, in France, bar staff tend to be looked up to or even considered cool. So you’ll probably find yourself getting some unexpected attention from starry eyed French customers. Most bar staff in Paris will be able to regale you with stories of numerous romantic flings with customers, so if you’re struggling to find accommodation, working in bar might allow you to bed hop around Paris, whilst practicing your French pillow talk.

7. Go out during the week

Waiting tables or pouring pints all weekend long can seem very exhausting, but there is an upside to it. For a start you’re not stuck in a stuffy office, there’s normally music playing while you’re working and when things are going slow you have time to strike up conversations with all kinds of people. Plus, when you’re done at the end of the night you can unwind with a few drinks yourself (that may even be on the house). And in Paris pubs at weekends can often be crowded and sweaty but you'll be able to go out during the week, when you won't have to queue for a drink and you can easily pick up a velib' or a taxi to get home.