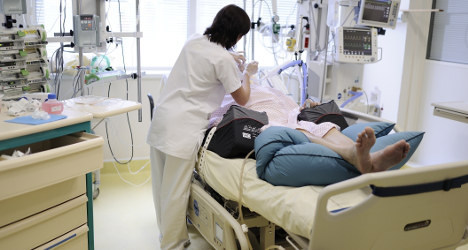 Issues around health are what keep the French up at night. Photo: Jean Sebastian Evrard

The French have always been regarded as a health conscious nation so perhaps it's no surprise that they worry about their physical well-being more than anything else including their work or financial situation.

A new survey published this week revealed that more than 8 out of 10 French people are concerned about issues regarding their health.

Whether it’s worrying about the consequences of falling ill or having the money required to stay healthy or indeed if they can afford to pay for their treatment.

In a sign of the impact of the French public’s concern over health matters, more than a quarter of the people who admit worrying about it have had to reduce their working hours to “take on family responsibilities”, whether taking care of a dependent relative or a child.

According to Serge Bizouerne the president of the services company Domplus, which commissioned the study, the study shows that there is “a significant demand among the French for support and services to help them manage their daily lives, as well as an ongoing change in the type of needs”.

Earlier this year a study revealed the extent to which anxiety, depression and other psychiatric disorders were affecting French people.

That study revealed that one in three French used psychiatric drugs in 2013, which some experts said represented a real “public health problem”. Others however insist it just reflects France's generous health system.

The one area that continues to worry the French more and more is the shifting work-life balance with 54 percent of respondents citing it as a concern, 8 percent more than last year.

Unsurprisingly, this concern mostly affects young people in the 25 to 35 year old bracket with 77 percent worried that their job might be encroaching on their personal lives.

When compared to Anglo Saxon countries France is often considered to have much better balance between work and personal lives with long lunches, regular holidays and the 35-hour week often put forward as evidence.

However there is an increasing view that Anglo Saxon working culture is increasingly influential with the need to be competitive in the global economy.

With France suffering from record unemployment it’s perhaps not surprising that 68% of those polled are worried about their job, however that’s a drop on the 71% in 2013 and 77% in 2012.

In 2012, the financial situation of the household and the fear of debt were number one concerns, affecting 81% of the participants. Today, 7 out of 10 people state this as a worry.

Other concerns for the French are managing their monthly finances (44 percent) and whether or not they will get a pay rise (10 percent of employed workers).

When it comes to easing these concerns it looks like the HR departments in companies will have some work to do as the French expect their firm to get involved when problems arise.

According to the study, “more than 75% of respondents think it is the company’s responsibility to get involved to ensure a good work-life balance’. How?

One way they can do that is being more flexible in terms of organisation in order to find ways to help employees who care for others.