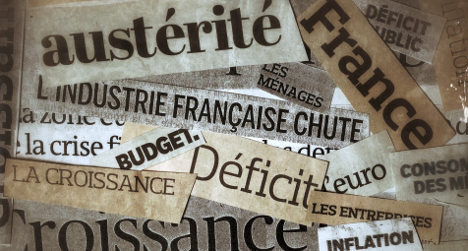 French MPs will begin debating the 2015 budget on Tuesday under pressure from the EU to make more cuts. Photo: AFP

France faced increasing pressure to modify its deficit-hit budget for 2015 on Monday, but Paris remained steadfast that it deserved "respect" and refused calls by Brussels to further rein back spending.

The left-of-centre government of President Francois Hollande flew in the face of strict EU budget rules last month, announcing deficits this year and next sharply in excess of commitments made to the European Commission.

"Figures we are hearing from Paris are not very hopeful. There are certainly concerns there," said Jeroen Dijsselbloem, the Eurogroup President and Dutch Finance Minister at a meeting with eurozone finance ministers.

France, like all members of the 18-nation single currency zone, has until Wednesday to submit its 2015 national budget to the European Commission in Brussels, but it has already warned of problems.

France estimates that next year's budget deficit — the shortfall between revenue and spending – will hit 4.3 percent of annual economic output, well over 3.0-percent ceiling set by the EU for member states.

Paris also said it would only meet the EU target in 2017, the second time the Hollande government, which took office on a promise of balanced budgets, has put back the date by two years.

The Commission — the powerful executive branch of the EU — was in 2013 granted the power to send back national budgets for revision under new rules
adopted to prevent a repeat of the eurozone debt crisis.

In Brussels, there have been widespread reports the Commission was preparing to force France to redo its spending plan, and even talk that Paris was in negotiations with European officials to avoid the embarrassment of a turned down budget.

But officials denied the reports and France said it will submit the problematic budget to EU officials unamended.

Publicly at least, the French government has hit back hard at pressure to do more to hit the EU targets.

"We decide the budget," Prime Minister Manuel Valls said on Saturday as he vigorously warned his European peers to "respect France, a big country."

Those words stung in Luxembourg on Monday, with smaller eurozone member states fearing a double standard between less powerful countries subject to
Brussels severity and the big countries allowed "too big too fail" latitude.

"There can be no favouritism, the rules are the same for everyone," said Spanish Economy Minister Luis de Guindos.

Meanwhile, French Finance Minister Michel Sapin said that lawmakers in Paris still had a major say in the final make-up of France's 2015 budget, in a discreet signal that Brussels-friendly amendments could yet be made in parliament.

"Thankfully" there is still "plenty of room for positive discussion" in the French parliament where fluctuations to "the economic situation" could be taken into account, he said.

Debate over the 2015 budget begins Tuesday in French parliament and could run until December.