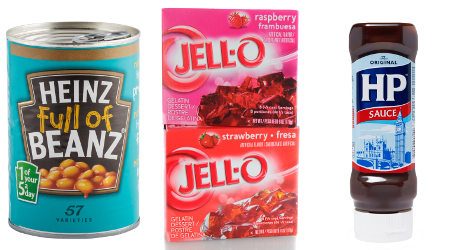 How do the prices of home comforts in France compare to elsewhere in Europe? Photo: Shutterstock

Our mission was this: hit the streets of Vienna, Madrid, Paris, Stockholm, Berlin, Rome, Lausanne and Oslo and fill a basket with 14 items that fill the hearts and clog the arteries of Anglophone foreigners everywhere.

When in Rome, why not sample some stracciatella soup, a plate of succulent osso buco, all topped off with tiramisù?

Forget about it! Where’s my Jell-O!

IN PICTURES – WHAT EXPATS MISS FROM BACK HOME

What then will it cost to get hold of these delicacies in cities across Europe? Scroll over the heat map below to count the cost of foodie homesickness?

How we tracked down the goodies

Living in a country like France and dreaming of items of food from back home feels very irreverent, but all expats have their needs and thankfully many of them can be satisfied, if you look hard enough – and if you are willing to pay more than you would at home.

Whether it’s Marmite, Heinz beans or Hershey’s chocolate, expat cravings from items from home are a common phenomenon, even if they are living in a country like France – renowned of course for its cuisine.

The trick however that most expats face, particularly those from the across the pond, is trying to get their hands on the brands they pine for.

Luckily there are more and more traditional items from “back home” appearing in French supermarkets, these days, which a quick trip to Monoprix, one of the country’s biggest supermarket chains reveals.

Not far from the Moutarde de Dijon you can find the famous HP Brown Sauce and just along the shelf from the Comte and Roquefort cheeses you can pick up a pack of Seriously Strong cheddar cheese.

But in order to get every item on our expat shopping list our cravings cannot be satisfied by Monoprix alone and it required a tip to the Epicerie Anglais de Paris, just off Place de la Republique.

The store, run by Jean-Jacques Eucher-Lahon, for the last 20 years is popular among expats and French alike.

“Our customers are Parisians,” Jean Jacques tells The Local. “That is to say they are from all over the world, but live in Paris. They come here looking for specific products.

(Jean-Jacques Eucher-Lahon from the Epicerie Anglaise in Paris)

“Americans come in and say “Oh my God”, when they see something they recognize from back home and many French come in who have been living in the UK or the US and they want to pick up something they used to eat over there.

Helen Watson, a from Ramsden International the UK based firm that supplies many of France’s supermarkets and expats stores with Heinz Baked Beans and the like told The Local that demand for British and American products is on the increase in France.

“The French eating habits are changing and they are eating on the go these days, hence English and American snacks and ready meals are becoming more popular,” Watson said.

“The younger French generation has also seen a lot of these products on US TV shows so they want the same,” she added.

So whether its homesick expats satisfying their appetites or locals wanting something different the demand is strong for Anglo products, meaning they should be readily available if you just know where to look.

The only problem then is the cost.

As the price list below shows, satisfying cravings can hit expats in the pocket, but many of them are prepared to take that hit, it seems.

Use the scroll bar on the chart below to see all the prices.

Incidentally, we're aware that we've navel-gazed somewhat and overlooked a lot of nationalities. Please let us know what you miss from your country in the comments or on social media. Can you give us the ingredients we need for another article?