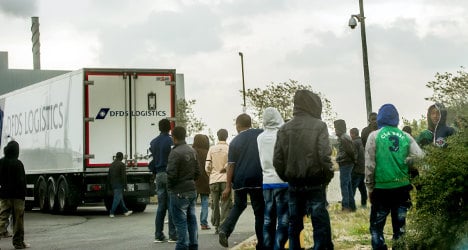 A day in the life of Calais migrants. Photo: AFP

As part of a desperate and dangerous ritual that happens scores of times per day around northern France’s main ferry port, a posse of migrants rushed at a truck left unattended for just a moment.

The group, which included men from Sudan, Afghanistan, Pakistan, Eritrea and Ethiopia, soon had the truck’s trailer open and were scrambling in. It was about 4pm on a weekday near a Shell petrol station a mere two-minute walk from a main migrant camp in Calais.

One of the men even scaled the back of the cab and hid in the hollow rear of the wind deflector on the truck's roof.

Moments later the driver reappeared, took a quick walk around his vehicle, and then pulled away, perhaps on his way to a UK-bound ferry, perhaps not.

There is no destination sign on the front of these trucks the way there is on a public bus. So migrants can end up just as easily being driven to Paris or Frankfurt as they can London.

(The kitchen facilities at a migrant camp near the Port of Calais. Photo: Joshua Melvin/The Local)

This was just another day for some of the roughly 2,000 migrants living in makeshift camps and squats near the Port of Calais, whose only goal is to get to Britain.

“I love England too much,” Anwar Kedir, 20, of Ethiopia told The Local. “It could kill me.”

He’d recently spent four days walking back to Calais after he’d hopped on a truck that took him to Belgium.

Apart from the adrenaline filled moment when the migrants climb onto a truck, there is little to be hopeful about their daily routine. There's no real shelter, not enough food and sanitary facilities are decidedly improvised, with people lined up for a turn at a water tap located on the edge of a forest.

In the migrant squat that’s sprouted up in an abandoned industrial facility in Calais the only running water comes from a fire hose. And the showers consist of wood frame stalls with blue tarps for doors.

On a recent morning men filled buckets with cold water from the fire hose and dragged them toward the stalls.

“They are going to have a shower,” said Hassan Adam, 25, of Sudan, as he looked on. “It’s really cold and it will get colder. Winter is coming.”

In the squats, as well as the improvised camps scattered in fields and forests around Calais, shelter is a tent on a pallet, which helps a bit in keeping its occupant above the wet ground. Or shelter is a home with walls crafted with discarded pallets and a roof made of black or blue sheets of tarp.

(A migrant brushes his teeth at a squat in Calais. Photo: Joshua Melvin/The Local)

However, some migrants sleep on the ground outside or the floor of whatever structure they can find. Adam’s home is a bit of concrete floor at the squat that he’s covered with a few layers of cardboard box and some blankets, which he refers to as his "sleeping bag."

He seems somewhat immune to the conditions, saying: “I go to the port as often as I can. Everyday people do. But it’s difficult to get in now."

Police launched a crackdown last month after several clashes with migrants who’d rushed en masse into the port in a last-ditch effort to get onto a ferry across the Channel.

For most migrants there’s nowhere else to go and nothing to do. Many have no money, nor access to telephones or internet. Most of the day is spent waiting or talking or dodging the police. (Graffiti on the back of a sign near the spot where migrants stow away aboard trucks. Photo: Joshua Melvin/The Local)

Minutes after the group of men scrambled aboard the truck near the migrant camp, French riot police, whose job it is to keep migrants off the vehicles, pulled up.

And then as part of the constant dance with the migrants, the police used their voices and threats to push the group back toward their camp and away from the Shell station.

As soon as the officers pulled away the migrants began creeping back toward the spot they had held previously. They then watched as one truck passed by and then another, until finally part of the the group peeled off.

It was getting on to 5pm and they wanted to make it to the free meal provided daily by charity group Salaam. For many it's their only food of the day.

The remaining group's patience was eventually rewarded when a truck pulled into the Shell station. The migrants began to inch their way toward it hoping this would be the one that would get them to Britain.