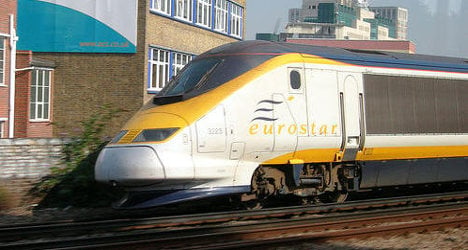 The UK has launched a process to sell its 40 percent stake in Eurostar. Can you imagine the French doing the same? Photo: Mike Knell/AFP

The government announced its intention to privatise its stake in Eurostar late last year.

"I am determined that we go on making the decisions to reform the British economy and tackle our debts. So we will proceed with the potential sale of the UK's shareholding in Eurostar today," finance minister George Osborne said in a statement.

The Treasury said it "would expect to reach definitive agreements in the first quarter of 2015" over the sale, ahead of a general election in Britain that is due soon after.

The train service has carried more than 145 million passengers in its 20 years of existence, and 10 million alone last year, the Treasury said.

Trade union leaders meanwhile hit out of the potential sale.

"This compounds the issue of foreign ownership of Britain's railways as the French state have first refusal on our slice of the highly profitable Eurostar cake," said Mick Cash, general secretary of the Rail, Maritime and Transport union.

"The French and Belgians think we are insane knocking off such a valuable and strategic infrastructure asset," he added.

There are concerns also that the government could offload the stake at a price deemed too cheap, in a repetition of last year's part-privatisation of Britain's Royal Mail postal service.

Shares in the company surged following its stock market debut.

Eurostar is soon to begin services to other French cities, while competition beckons.

Last year, Germany's Deutsche Bahn obtained approval to run trains through the Channel Tunnel and is expected to begin offering services linking London to Frankfurt and Cologne in Germany from 2016.