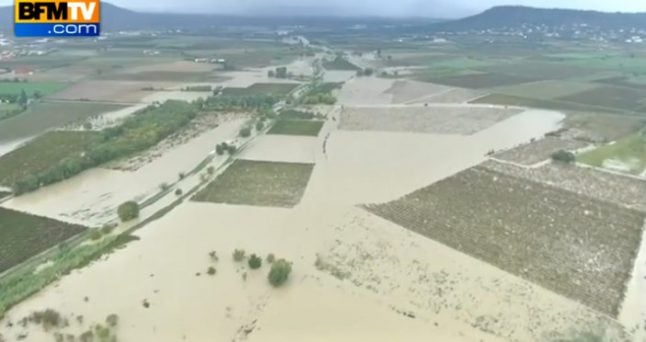 An aerial view of the Gard department, much of which was submerged under flood waters at the weekend. Photo: BFM TV

The weather warnings were finally lifted for the Gard department of southern France on Monday, but not before heavy rains and caused widespread flooding across the region.

The Gard as well as surrounding departments had been on red alert – Météo France's highest weather warning since Friday afternoon when downpours caused rivers to burst their banks.

The result saw homes inundated with flood water, roads and bridges disappear and emergency services forced to respond to hundred of call-outs.

"It would be very dangerous to lower our guard," authorities said, with firefighters and water rescue services still on alert.

Some business owners in the area have however blamed authorities for over-dramatizing the crisis.

In the town of Uzès one restaurant owner told Le Parisien: "We've got no customers because authorities are saying it's going to be the apocalypse."

(A bus that was swept away in flood waters – Photo: Boris Horvat/AFP)

(A bridge that stood for 150 years washed away in the village of Cailar, Gard. Photo: Le Parisien TV)

The bad weather that has battered the south of France in recent weeks is not over yet.

The departments of Ardèche, Drôme, Bouches-du-Rhône, Var and the Vaucluse all remain under Orange alert for storms and heavy rain on Monday.