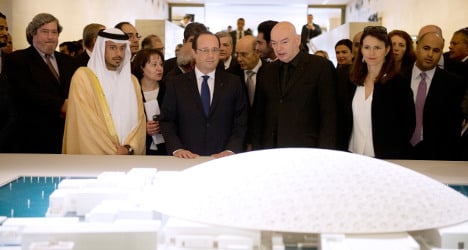 Masterpieces by Leonardo da Vinci and Vincent van Gogh will be among 300 works displayed at the Louvre Abu Dhabi, the Emirate said on Sunday, as it aims to become a leader in fine art.

The museum, built at a cost of €500 million ($630 million) and set to open in December 2015, will feature paintings and sculptures from 13 of France's most renowned collections spanning from pre-Bronze Age to Pop Art, it said in a statement.

"This will be the first time many of these works will travel to Abu Dhabi or even the Middle East, and are a rare opportunity to see important art from French museums," said Sultan bin Tahnoon al-Nahyan, chairman of the organisation behind the project.

The loaned works include da Vinci's Portrait of an Unknown Woman, Claude Monet's Saint Lazare Station and Andy Warhol's Big Electric Chair, as well as ancient statues, vases and masks from across Asia and Africa.

Many of France's grand museums, including the Louvre, Musee d'Orsay and the Palace of Versailles will loan art to Abu Dhabi as part of a 30-year collaboration with the Emirate worth €1 billion ($1.3 billion).

French Culture Minister Fleur Pellerin said the loaning of the works was "an acknowledgement of both the extraordinary richness of our national collections and the expertise of our museums".

The 64,000-square-metre (700,000-square-foot) Louvre Abu Dhabi, built on the island of Saadiyat in the oil-flush Emirate, will have 6,000 square metres dedicated to permanent installations and 2,000 set aside for temporary exhibitions.

Hovering above the complex will be a giant, 180-metre (yard) dome perforated with designs that will project light patterns in the shape of palm trees on the exhibition space below.

'Birth of a Museum'

A model replica of the Louvre Abu Dhabi was displayed at its parent gallery last year with a selection of what will eventually become the Emirate's permanent collection in an exhibition titled "The Birth of a Museum".

Also being loaned from France are Titian's The Woman with a Mirror, Jacques-Louis David's Napoleon Crossing the Alps and Edouard Manet's The Fife Player.

Among artworks from antiquity heading to Abu Dhabi are a 4,000-year-old statue of Mesopotamian ruler Gudea, a figurine of King Ramses II from Egypt's 19th dynasty, and a 16th century ornate Nigerian salt seller.

Each piece will be displayed in Abu Dhabi for up to two years, before the number of loaned French works decreases over the course of a decade as the museum builds its own collection.

A French source told AFP that normally-conservative Abu Dhabi had not censored any nudity or religious symbolism that appear in the donated works.

"No work has been refused," for a collection that includes a Jewish Tora from Yemen, an ancient Hindu statue, a Buddha and works evoking African Animism, the source said.

According to its creators, the Louvre Abu Dhabi, which was designed by French architect Jean Nouvel, is the largest global cultural project since New York's Metropolitan Museum opened in 1870.