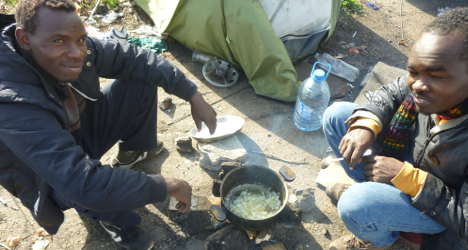 Why are Calais migrants so desperate to get to the UK rather than seek asylum in France? Photo: AFP

'El Dorado' is frequently used by the French press to describe the lure the UK holds for the migrants waiting in the northern French port city of Calais for their illicit and dangerous chance to cross the English Channel.

The name implies an illusion and false hope and raises the question of why the migrants don't just apply for asylum in France, which in theory would give them access to healthcare, financial aid, accommodation and possibly legal assistance for their application.

The Local talked to dozens of migrants living in the camps in search of answers.

It appears many of the some 2,000 migrants living in filthy squats and squalid camps in Calais desperately hoping to get to the UK, have reached the same conclusion: they feel they are not welcome in France.

They point to racism from locals, the months-long wait for government papers, the harsh existence in muddy, medieval camps and living off one meal handout per day.

“They don’t want us to stay. France doesn’t like immigrants,” Nebi Kifrom, 22, of Eritrea told The Local. “If you ask for asylum they will say to us come back in three, four months. What am I supposed to do until then?”

Another question is where will they live.

Matthieu Tardis, from France Terre D’Asile, a charity which provides “legal and social services” to asylum seekers and refugees in France told The Local recently that France has accommodation to cater for 22, 000 asylum seekers, but they had 65,000 applicants last year.

“The problem is becoming more and more serious,” he said.

Because most of the migrants in Calais are without money or much hope of outside help, they want to find work immediately. It’s one of the primary factors propelling them out of France.

They are aware of France’s record unemployment numbers (the 6.2 percent rate in the UK is four percentage points less than in France) and poor economic prospects. “There is no work here, too many problems,” said Sofi Hann, 24, who comes from a region that straddles Afghanistan and Pakistan. “I’m going to America, but I have to get to England first.”

The language and perceptions about working papers are the next most important obstacles in the minds of migrants.

'At least the Italians try to speak to you'

As the migrants come from Sudan, Ethiopia, Eritrea, Afghanistan, Pakistan and Syria, if they speak a western language it’s most likely to be English and not French. They know their prospects of finding work – or even managing daily life — are poor without basic French.

“Even if they know English they don’t want to speak it,” Ibrahim Adam, 30, of Sudan said of his interactions with some French locals. “They understand what I am asking but they prefer to answer in French. At least the Italians try to speak to you.”

Also the migrants need papers to allow them to legally stay and work in France. But it can take months to get a preliminary appointment to apply for asylum.

The famously difficult bureaucracy in France, which even the French admit is unwieldly and needs reform, is no kinder to desperate migrants than it is to anyone else.

“They give you an appointment in maybe eight months. In the meantime you have to stay in these conditions,” said Adam, the 22-year-old Sudanese migrant, speaking near the foul smelling outdoor toilets at a squat in Calais.

“Then they give you a paper and tell you to come back in three months.” (A migrant brushes his teeth at a Calais squat. Photo: Joshua Melvin/The Local)

'They feel as though they are not welcome in France'

Even though Interior Minister Bernard Cazeneuve has vowed to send workers out into the field to try to convince migrants to build a life in France, most migrants told The Local they’d never seen anybody from the government.

While migrants wait an average of two years for a decision they are not legally permitted to work most of that time. Instead they are reliant on a €336 per month allowance from the French government, which may not seem much, but is significantly more than the €185.90 monthly payment in the UK.

However, for most migrants in Calais the thought of government aid is a distant and abstract thought. The hand outs of clothes, cans of food and tents, for those lucky enough to have them, come from charity groups or sympathetic citizens.

“For them this is life in France,” said Ibrahim Adam, 30, from Sudan. “They feel as though they are not welcome.”

As he spoke to The Local, Adam, stood in a muddy field that was home for some 100 migrants living in tents and cooking over small campfires. Cruelly, it sits behind a caravan dealership with full of unoccupied mobile homes and camping cars.

The migrants also said there were darker currents among the locals besides reticence in using English. Some reported overt racism like people shouting insults out of their car windows while driving past or run-ins with angry men on the street.

He added: “I asked to live in France, but the country doesn’t want me. How can I stay here?”

Many like-minded migrants believe their only option is the illegal and occasionally deadly journey stowed away in trucks that head across the Channel to a country where they’re convinced applications are processed faster and work is easier to find.

They see the prospect of dying from carbon monoxide poisoning or being run over by a truck on the trip across the water as a risk they are willing to take.