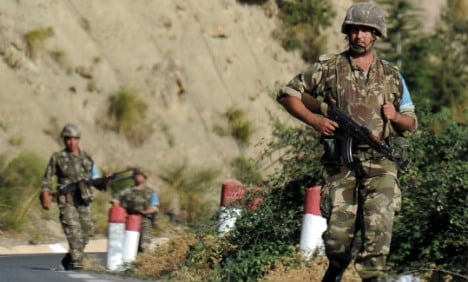 And this is having a knock-on effect on holiday plans, especially to destinations like Morocco and Tunisia, both former French protectorates where France maintains strong ties.

"Clients are saying 'I'm scared, I don't want to go' and operators are seeing cancellation rates between 15 and 50 percent in the Magreb countries," said Rene-Marc Chikli, head of tour operator union SETO.

SETO's 70 members normally pack off some 150,000 sun-seekers for the All-Saints holiday at the end of October-early November, two-thirds of these to north Africa, often a quick two to three-hour flight across the Mediterranean.

But after the French authorities' warning and the brutal beheading of Gourdel, "people aren't booking and we will probably be 20,000 or 25,000 clients short to these destinations," said Chikli.

Some of these clients will still take holidays, just head elsewhere, he said.

Authorities attempt "to give the most up-to-date information possible on the risks our compatriots face," said French foreign office spokesman Romain Nadal.

"We are not alarmist but realistic," he said.

But Jean-Pierre Mas, president of the SNAV union for travel agents, said there had been a "15-percent cancellation rate for Tunisia and Morocco and a bit less for Turkey."

Marmara, part of the TUI travel group, whose reasonably priced package deals to Tunisia and Morocco — about 450-600 euros, or $550-750 a head — are big sellers, likewise said it had 25 percent cancellations for both destinations for the school holiday, and 15 to 25 percent cancellations on later bookings. The marketing head of travel agency Transat France described the reaction immediately after Gourdel's beheading as "skin-deep".

"Sales to Morocco and Tunisia dropped by 50 percent in the days afterwards. But three or four days later, they rebounded," he said.

However Mas said the "real problem was the fall in reservations for future trips … we are 50 percent down for Tunisia and Morocco."

Many tourism professionals cited what they called the irrational fears of some travellers linked not only to the wave of Islamic extremism but also to the Ebola virus.

"We had the absurd case of a gentleman who cancelled his trip to Australia because he had a stop-over in Dubai" which is not on the French foreign office list, complained Jean-Francois Rial, head of the Voyageurs du Monde agency.

Laurent Conseil, head of the Voyages de Thybus agency, said: "We've had people cancelling business trips to Senegal because they are afraid of Ebola but Senegal is not even affected."

He said there was a "broad fear of Africa, linked to terrorism but also Ebola fears."

Clients are asking "where can we go that is calm," he said, adding that they were shipping many people off on cruises.

Several tourism professionals took aim at what they called the "clumsy" communication of the French authorities, which they said had only succeeded in "sowing panic".

The head of TourCom, Richard Vainopoulos, joked that the list should be expanded to Britain and the United States, as countries that are heavily involved in the fight against Islamic State militants.

However, one destination's loss is typically another's gain, as European winter sun spots are seeing a rise in popularity, especially countries hit hard by the eurozone's economic crisis such as Greece, Italy and Spain.

Tour operator Thomas Cook said it had boosted its capacity towards certain destinations to compensate — including mainland Spain and the Canary Islands.