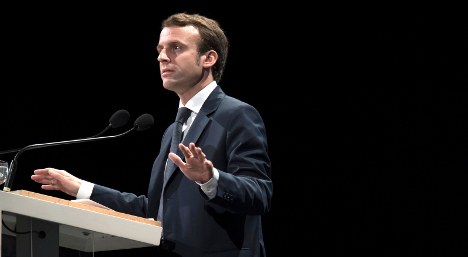 "Europe needs a New Deal," he said in an interview published in the weekly Journal du Dimanche, evoking the original New Deal which transformed the US economy following the Great Depression of the 1930s.

Macron's comments came after Dutch Finance Minister and Eurogroup chief Jeroen Dijsselbloem said France should not be granted extra time to bring its budget deficit within the EU limit of three percent of GDP.

Macron, explaining his vision, said: "France engages to pursue and even intensify its reforms; the European Union announces a grand relaunch plan through €300 billion ($379 billion) of investments."

Such a 'New Deal' would allow France to get hold of €10 billion of supplementary investment funding each year, he added.

"Everybody wins, while at the moment everyone is losing. The slowdown of the German economy is a new setback." Finance Minister Wolfgang Schäuble on Thursday denied Germany was falling into recession and stuck to his opposition to higher spending to revive the eurozone economy.

More growth will not be "achieved by writing checks," he said at an event on the sidelines of World Bank and International Monetary Fund meetings in Washington.

Macron recognised that France itself had work to do on the fiscal front but insisted that "we have six months to create a new deal in France and in Europe."

While talking of the European perspective, the French minister said it was no good simply blaming Brussels, Berlin or anywhere else for the country's financial woes.

"The solution lies within our capacity to move, to modernise the country, to unblock, to free up the economy, to provide the opportunity to those who want to work to create, produce, to operate much more easily."

He said that he would, in the coming weeks, announce details of a draft law containing his ideas which would be voted on "as soon as possible next year."