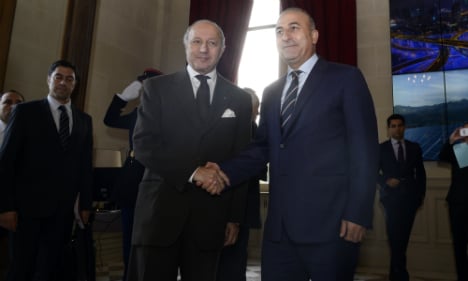 Foreign Minister Laurent Fabius told reporters: "Today, I am announcing that France is ready to open new chapters for negotiations, notably chapters 23 and 24", which refer to fundamental rights and justice.

The road to membership of the 28-member bloc is long and arduous.

Candidates must negotiate with the European Union various sections — or chapters — of EU law that they transpose into national legislation.

Turkey began formal EU accession talks in 2005 but they made little progress, with Ankara angered by Brussels' insistence on human rights protections and strong reservations in some member states against allowing in such a large Muslim country.

Fabius said the talks "have to continue in a transparent fashion, in good faith and by respecting the framework agreed."

"France wants to move forward," he said, after a meeting with his Turkish counterpart Mevlut Cavusoglu.

The Turkish minister said: "Turkey is ready to open all negotiation chapters. If France could declare officially that it was not opposed to opening any chapter, that would be perfect, that would be a positive message."

"That's what we expect," he added.

A European Commission report published on Wednesday accused Turkey of undermining the independence of judges and freedom of expression in the past year.

Nevertheless, the EU's executive body said that Turkey was a strategic ally against the Islamic State jihadists and should carry on membership talks with Ankara despite concerns over human rights.