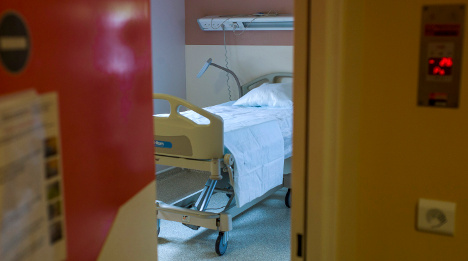 A room at Bichat hospital in Paris which has been set aside to treat patients with Ebola. Photo: AFP

Just a day after fears a case of Ebola had been detected near Paris proved to be a false alarm, testing revealed a second suspected case was in fact not the deadly disease, French Health Minister Marisol Toraine said.

According to French media reports the American patient had been under observation because doctors considered her to be potentially infected and she was placed in an sterilized isolation room as a precaution while awaiting the results.

But the testing showed she is not infected with Ebola, though doctors have not said what sort of illness she is suffering from.

The woman, who hasn't been identified, had been in Africa recently, where medics believe she may have contracted the disease.

Bichat hospital in the capital has been designated as a special treatment centre in case of an outbreak of the disease in France, which has killed over 3,900 in West Africa.

A ward on the hospital has been set aside as an isolation unit to keep potential infected patients away from the public.

For the moment the hospital is not commenting on the suspected case and is referring all enquiries to the Ministry of Health, which is also declining to comment at this stage other than say: "If an Ebola case were to be confirmed in France, it would be made public immediately. This is not the case for now."

On Thursday night around 60 people were asked to remain inside a government office in the north west of the capital after fears were raised that four people may have contracted the disease.

The four had recently returned from a trip to Guinea and had fallen ill or were showing symptoms of flu.

However after tests were carried out it proved to be a false alarm.

France has set up a plan to deal with an outbreak of Ebola and insists it is prepared in the case of the disease reaching the country.

Specific hospitals in every region have been designated to deal with cases of Ebola and in each of those, isolation wards will be set up to keep victims of the virus separate away from other patients. A laboratory is also on stand-by to carry out tests as soon as a suspected case is detected.

Earlier this week The Local reported that scientists in the UK predicted there was a 75 percent chance of Ebola coming to France by the end of the month.

SEE ALSO: Ebola: What is the risk of it coming to France?