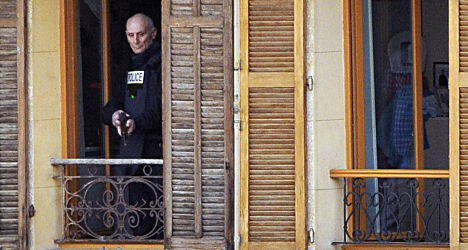 Jean Gabro, 59, is pictured here holding a gun at his window as part of a police reconstruction of the shooting of the 15-year-old thief. Photo: Boris Horvat/AFP

Jean Gabro, 59, opened fire on Antoine Rodriguez as the teenager was running away after stealing a computer from a nearby shop in the southern French city of Marseille.

The incident took place on May 2, 2011. Gabro had already twice chased away a group of young robbers by brandishing a weapon from his first-floor window but the third time, he opened fire, hitting Rodriguez in the heart.

Nicknamed "Tolcio" or "little Antoine", the teenager had no prior criminal record.

But "he was 15, the age where we don't know what we're doing and we do stupid things," his lawyer, Christine D'Arrigo, told the court.

He decided to steal "to be like the others," she argued, portraying participation in such crimes as a form of rite of passage in the run-down area of Marseille from which he came.

Gabro's lawyers argued that the deadly shot was an "accident".

"He never aimed at him. He did not intend what happened," said Eric Dupond-Moretti.

He had "had it up to here" with the petty crime in his area, added Dupond-Moretti.

Gabro himself expressed no remorse for the death of the teen.

He did however say: "If it happened again? I should have just closed the window. Let them steal what they want, I don't care."

Last year the case of a jeweller who dead a robber who was fleeing from his store reignited a debate in France over vigilante action to defend one's property.

The 67-year-old jeweller Stephan Turk, from Nice took matters into his own hands shooting dead an 18-year-old man who had just robbed his jewellery shop.

According to reports, Turk chased after the two thieves and fired as they fled on a scooter, hitting one of them in the back with what proved to be a fatal shot. Turk was later charged with murder.

However many in France expressed support for the shop owner.

A Facebook group was started and entitled “Support for the jeweller in Nice” has exploded, gaining hundreds of thousands of followers, and provoking thousands of comments, overwhelmingly positive towards the actions of the 67-year-old businessman.