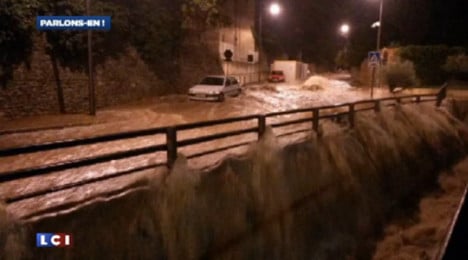 The town of Nîmes is the latest to find itself under water due to the flood waters. Photo: Screengrab TF1

There seems to be no end to the extreme weather hitting the south of France.

Once again on Friday several departments in the south were placed on Orange alert – the second highest weather warning – as heavy rain and storms lashed the region.

Meteorologists alos issued the highest warning, a Red alert, which encourages maximim viligence, to people living in the Gar department.

The Ardeche, Drome, Gard and Herault departments were all back on alert on Friday morning with the severe weather set to persist throughout the day and into Saturday.

The mayor of the town of Nimes took the step of warning residents to stay indoors as flood waters rose.

“We have just opened a sports hall in the case that affected residents may need lodging,” the mayor of Nîmes Jean-Pierre Fournier told BFM TV.

He also said schools in the town have been advised not to open their doors on Friday.

“We are asking people to avoid any kind of travel unless it is absolutely necessary,” the mayor said.

Around 30cm of rain fell overnight, leaving the northern part of the town particularly affected.

Conditions could worsen from Friday into Saturday with heavy rain forecast across the four departments.

The region has seen several episodes of severe weather since the middle of September, which at various times has left areas submerged under water.

The city of Montpellier has been hard hit, after twice being left looking more like Atlantis.

According to Météo France the extreme weather is down to a large low pressure system over the Atlantic, which is pushing warm, humid air up from the Mediterranean over the south of France.

This combined with warmer than average temperature of the Mediterranean has provoked the sustained downpours in the region.