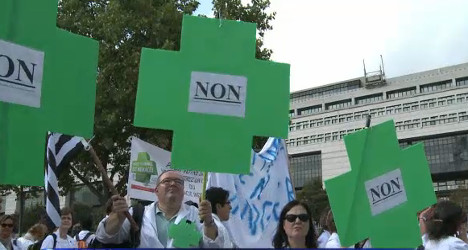 Hundreds of pharmacists strike in protest against government reforms, showing an increasing level of defiance against the government. Photo: AFP

In his pristine dispensary on a quiet corner in Paris, chemist Antoine Louguot never thought he would hang up his white coat in protest and go on strike.

But fury at a government proposal to deregulate pharmacies saw Louguot, 40, join an unusual group, including notaries, doctors and bailiffs, in walking off their lucrative jobs recently over a similar threat to their respective monopolies.

Analysts say that even in a country known for its legendary labour disputes, the action showed an extraordinary level of defiance against a deeply unpopular government, making much-needed economic reforms nearly impossible to implement.

"This strike was a strong action against the government and a sign to the people that it is we who have the power," said Louguot.

"When we stand together they cannot change our way of life."

Guy Groux, a specialist in labour conflict said that while there was a "folkloric culture of striking" amongst some French workers, the wave of action by self-employed professionals was highly unusual.

"In France today we have not only an economic crisis, we have a political crisis, even a moral crisis some say, which involves a very strong defiance towards the executive," said Groux.

Hardly a day seems to go by without a cortege of striking workers weaving their way through the streets of France, angrily trying to prevent a change to the status quo.

And it has been white-collar workers leading the charge recently.

They fear they could be replaced by cheaper pilots as Air France launches into the low cost flight market, seen as vital to remaining competitive in the cut-throat world of aviation.

A nation of strikers?

The long-held view that striking is somewhat of a national sport in France is not entirely unjustified.

France topped European charts in terms of strike volume between 2001 and 2010, according to Kurt Vandaele of the European Trade Union Institute, who said there were however no data available for Greece, and records were patchy or Italy and Portugal.

Economist Stephane Garelli, an expert in world competitiveness, agreed, saying that with 43 days lost to strikes per 1,000 habitants for the three years ending in 2012, France was "one of the biggest sinners on the market."

Ironically, this is because French unions are relatively weak and divided, with only eight percent of workers unionised, said Groux.

"The reform problem is completely different when you have very weak, divided unions all looking to protect themselves."

Add this to a highly politicised society, and you have – from Revolution to the Recession – a nation quick to its feet when it feels its way of life is threatened.

Whereas in countries like Germany, unions take part in negotiations from the get go and going on strike is a last resort, in France the strike is usually part of the negotiating process.

"Sometimes aggressiveness is a sign of weakness," said Garelli.

"It would not be unusual that when you start a negotiation in a company, people will start to strike just to say you know we are serious about it and this is what it may cost you, and then after they may negotiate."

With three decades of mounting unemployment, people feel their jobs are all the more uncertain, worsening the confrontation, he said.

But Groux argues that while "spectacular" strikes involving rail workers and pilots are hugely visible in France, due to their disruptiveness, the overall number of strikes in the country is now just a tenth of that recorded 40 years ago.

Reforms in the face of defiance

With the population on the offensive, Francois Hollande's government is facing an uphill battle.

"It's always easier to discuss social reforms when things are going well rather than the contrary when you are facing crisis and the economy is flat and nothing is happening," said Garelli.

Physiotherapist Gil Delalande also went on strike for the first time over the proposed deregulation.

While he admits there may be "a certain Gallic spirit of contestation" behind the protests, he denies that French are against change as a rule.