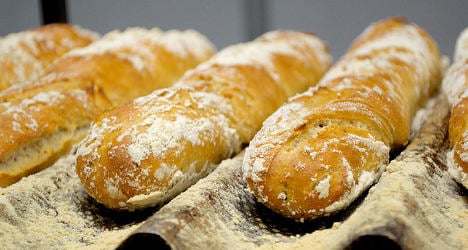 The perfect baguette has long been the ultimate test for aspiring bakers the world over.

And now the ability to produce this long, thin loaf is in global demand because the appetite for baked delights from France is surging in regions with burgeoning middle classes – notably Asia and the Middle East.

"The growth is linked to lifestyle changes, and more broadly to the emergence of middle classes," says Christophe Monnier, an expert at the Ubifrance agency which helps French companies set up overseas.

Forget the timeworn caricature of the Frenchman in black beret and blue overalls with a baguette tucked under his arm: French baked goods are in, and they are taking the world by storm.

Finished baked goods, which end up being sold in French restaurant chains or hotels abroad, have leapt from €850 million worth to 1.5 billion during the same period.

The growth has been spectacular in some markets, with exports to China soaring 7,800 percent over the past decade.

The bakery sector "is undeniably the spearhead for the (French) food sector" abroad, Monnier said.

Chains have opened locations across the globe to cultivate the craving for French baked goods.

Another, Delifrance, has several hundred locations abroad, including more than 200 across Asia.

But France's small-scale bakery tradition, which is still vibrant at home, has also ventured abroad.

But baguettes cannot conquer the world without trained bakers, and the National Bakery and Pastry Institute (INPB) in Rouen is trying to meet that need.

While a group of students from a number of countries tries to assemble a Saint-Honore — an elaborate concoction involving cream puffs and caramel glaze — the Institute's director Jean-Francois Astier said there is ample foreign interest in their training programme.

And in addition to the foreign students who make up 15 percent of the INBP's professional trainees, "a small majority of the French students… want to go overseas."

Alexandre Matcheret, 47, is one Frenchman who left to try his luck abroad.

He has just opened two Kayser boutiques in Cambodia, and is excited about the potential.

"Bread is already in their culture, but it is not the same process, it is very industrial," Matcheret said.

And what is the secret of the perfect baguette?

Denis Fatet, who coordinates training at the INBP, defined the ultimate test of the baker's skills, this way: "The baguette is made with no additives, and it must not be frozen.

"Its crust must be crisp, with a beautiful golden colour. The doughy part, cream-coloured, has irregular holes, and melts in the mouth."