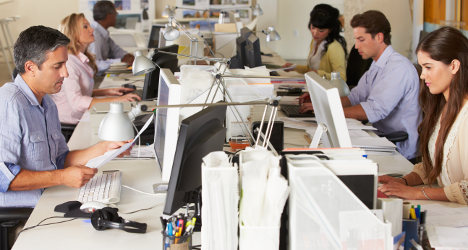 A think has an idea to fix the French economy that worker's may not like. Photo: Shutterstock

“Make more, work less” – that was the argument French leaders famously put forward in support of their flagship 35-hour week, but some more economically liberal economists now think it’s time to flip that equation on its head.

A new report from a pro-business think tank says the best thing France can to pull itself out of its economic slumber is to make people work more, but not get paid for it.

“An increase in the number of hours worked, with no additional compensation, would allow for a decrease in labour costs and an increase in production, which would then allow for a real boost in French competitiveness,” the Institut Montaigne wrote in its report.

The think tank bases its argument on the fact that the French, by many calculations, work a lot less than their neighbours.

In the private sector French workers put in around 23 fewer days on the job than their counterparts in Germany and 30 fewer work days than the British, the Institut said.

SEE ALSO: Is it time for France to ditch the 35-hour week? There were also significant differences when it came to French government workers. According to data from the Paris-based OECD think tank French civil servants worked over 15.5 fewer days per year when compared with the average of 20 other European nations.

So the Institut thinks the best way to catch up with everyone else is to push the work week up to 38 or possible 40 hours. It says bosses and workers should work together to hammer out their new working hours, instead of allowing the government to do so.

For an expert from the prestigious French Economic Observatory at Sciences Po university the Institut's suggestions would only make matters worse if introduced now.

“One day we will need to extend the working week in France, but we’ll have to do it once economic growth has returned and companies are having trouble finding enough workers,” Economist Eric Heyer told The Local on Wednesday. “We’re facing the opposite situation now. Companies say they have too many workers for the amount of work to do.”

He added: “Given the current situation, increasing working time would provoke layoffs. So today this would only have negative effects on working and unemployment.”

And many French workers will remind you numerous exceptions mean, in reality, the 35-hour week applies to slightly less than half of French workers, and does not include managers.