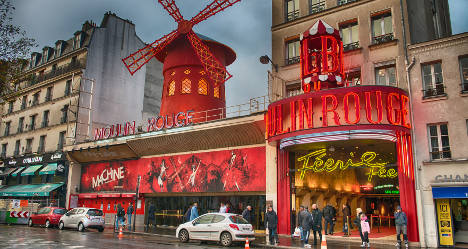 As quintessentially Parisian as the Eiffel Tower or the Sacre Coeur, the Moulin Rouge cabaret on Monday celebrated its 125th anniversary and it's in very good shape considering its age.

The birthday party was gatecrashed by "sextremists" from the group Femen who bared all on the roof of the famous building to protest against the use of women in the sex trade.

The women climbed on to the roof of the Parisian landmark and unfurled a red banner over the word "Rouge" of the famous neon sign which bore the slogan "Red is the colour of the revolution".

Despite pouring rain, the two women then removed their tops to reveal the words "not for sale" daubed on their chests, as tourists in the Pigalle district looked on.

The women were eventually removed from the roof by two security guards.

Despite the opposition from groups like Femen, the iconic red neon windmill in the heart of Paris's Pigalle red-light district is still pulling in the punters. Shrugging off the economic crisis, the Moulin Rouge is sold out nearly every night for its two two-hour shows, seven nights a week, 365 nights a year, for tourists and locals in roughly even numbers.

The Moulin Rouge's vital statistics are impressive for such a venerable old institution: occupancy rate of 97 percent, 600,000 guests a year and 450 staff, generating an annual turnover of 65 million euros ($81 million).

Attracted by the history and mild titillation of the 60 can-canning Doriss Girls, tourists flock there in their droves, led by the Chinese, Russians and Americans.

They come to drink in the champagne –  240,000 bottles a year, the biggest consumer outside wholesale retailers – and the history, knowing that Edith Piaf, Liza Minnelli and Frank Sinatra have all trodden the boards here.

The spirit of the scantily-clad Doriss Girls of the past like La Goulue and Nini Pattes still stalks the stage where their 21st-century successors from 14 countries strut their stuff.

Vital statistics of a different kind: each Doriss Girl must be at least 1.75 metres tall and a classically trained dancer.

Their partners on stage, the Doriss Boys, must be at least 1.85 metres, as must the jugglers and acrobats who complete the show.

The costume room sparkles with 800 pairs of shoes and 1,000 feathery costumes.

Several times a year, hundreds of young women hoping to can-can in the footsteps of history turn up for casting but very few are chosen under the watchful eye of ballet mistress Janet Pharaoh.

From the moment it opened its door in 1889, the Moulin Rouge was a smash hit, as Parisians streamed in their thousands to watch the high-kicking dancers perform their moves in what would later become known as the "French can-can".

Within a year, it had attracted its first royal patron, the legendary carouser Edward VII, Prince of Wales, who was reportedly accosted by the famous show-girl La Goulue.

"Oi, Wales, champagne's on you," she cried out to the royal guest in the middle of the show, or so the story goes.

It also played host to the "Bal des Quat'z'arts", a risque masked ball climaxing in the procession of Cleopatra – a naked woman carried by four men and surrounded by "nude girls who lay, languid, on flower beds," according to the show's website.

Famous punters abound: Salvador Dali, Ringo Starr, George Michael and Elton John are among the legends who could not resist the charms of the Moulin Rouge.

Even the King himself, Elvis Presley, was a regular on trips to Paris.

The cabaret has passed into popular culture, not only with Luhrmann's 2001 film but before that in 1952 with John Huston's version starring Zsa Zsa Gabor.

And the Moulin Rouge troupe also holds the record for the most consecutive jump-splits in 30 seconds, 62 by 30 dancers.

"The Moulin Rouge draws its power from its history, from the Bohemian lifestyle of the Belle Epoque, from the French can-can that made it famous from the beginning, from the artists down the ages who came here," current owner Jean-Jacques Clerico told AFP.

"In 2014, the Moulin is still celebrating Parisian life and writing a new chapter in its history."