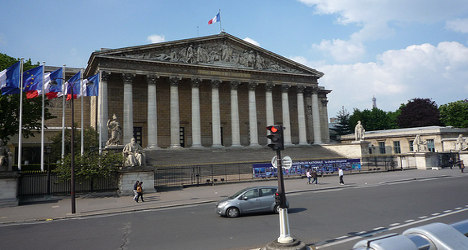 A French lawmaker was fined due to a battle over a pronoun. Photo: Ambernectar13/Flickr

The French are very protective of their language, especially against Anglo incursions. But sometimes the furore is about more than protecting Molière’s tongue from the likes of "weekend", "email" or "hastag".

This became clear on Monday during a hearing in the National Assembly which was being presided over by a female Parisian lawmaker, Sandrine Mezetier.

One of her fellow lawmakers, centre right-UMP Deputy Julien Aubert, asked to speak, but in doing so referred to Mezetier as ‘Madame le president’.

This is important because French assigns a gender to all nouns and 'la' proceeds words deemed to be feminine. Also feminine words frequently end with and 'e'. Metezier demanded these rules be applied to the way she was addressed by other MPs.

Accordingly she responded: “Mr. Aubert I’m calling you to order. It’s ‘Madame la presidente’. It’s a call to order without a fine, but next time…”

But Aubert refused to bend, noting that according to France’s notorious language police, l’Academie Française, "Madame la presidente" would refer to the president’s wife, which she is not.

By then Mezetier had had enough and fined her obstinate colleague, who refused even then to switch the gender of his articles.

The Local has contacted the Acadmie Française for a call on who is right, but was told it could be a couple days before the answer comes.

In the meantime the linguistic battle has prompted a war on the Twittersphere between Mezetier’s backers and detractors.

SEE ALSO: 15 things that can only happen in France

Outspoken Green party lawmaker Cecile Duflot wrote: “Thanks and support to @s_mazetier, this isn’t trivial. And many respectful UMP members don’t do this kind of thing.”

Her comments were echoed by feminist and activist Caroline de Haas who tweeted: “A woman at the head of National Assembly seems to bother  @UMP. It’s true, it’s only 2014 after all.”

But Mezetier’s linguistic stand also drew some harsh rebukes as well. Deputy Eric Ciotti wrote “A grotesque and ridiculous sanction against J. Aubert in the NA. The routed Socialists bring back the thought police.”

Another critic, lawmaker Pierre Morel, wrote the “The sanction against Julian Aubert is dumb Sandrine Mezetier is abusing her powers.”