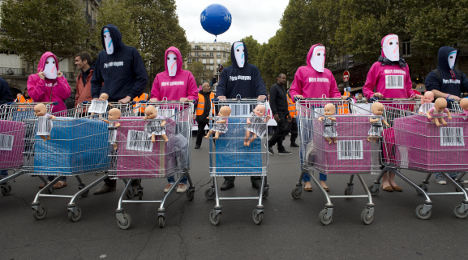 Tens of thousands took to the streets in Paris and Bordeaux Sunday to demonstrate for what protesters called "traditional family values" and against assisted pregnancies and surrogacy.

The demonstrations were organised by the "Manif pour Tous" ("Protest for Everyone") group that waged an ultimately unsuccessful grassroots movement against the adoption of same-sex marriage in France last year.

Their target this time is medically assisted procreation techniques for lesbian couples and surrogacy, which must be "fought at all costs," according to the group's president Ludovine de la Rochere.

The group estimated that 500,000 people took part in the demonstration. Police however said 70,000 were present in the capital.

In Bordeaux, police said 7,500 people turned out for the march while organisers claimed 30,000.

The Paris march began under grey skies and cool conditions under the watchful eye of some 1,000 police. Previous marches have seen isolated acts of violence and arrests, but police said the Paris march passed off without incident.

Seeking to calm passions ahead of the rally, Prime Minister Manuel Valls stressed that surrogacy "is and will remain banned in France".

But this did not seem to pacify the marchers who carried banners reading: "No to surrogate mothers" and "A woman is not a baby-machine".

One pensioner told AFP: "The next stage will be to put children on shop shelves and we will choose the ones we like."

Surrogacy is a form of "industrialisation" and "modern slavery", judged another protester, 30-year-old Thibault.

Manif pour Tous mounted a vigorous campaign against same-sex marriage — at one point claiming to have brought 1.4 million on the streets of Paris. But President Francois Hollande defied the protests and in April last year France became the 14th country worldwide to legalise same-sex marriage.

An Ifop poll for the Atlantico website on Sunday showed that less than a third (31 percent) of French people were behind the values of the demonstration.

The "All Out" gay rights organisation called for a counter-demonstration "for equality of all couples and families", but drew only a few hundred people under the rain in a central Paris square, Place de la Republique.

An Internet petition it launched, however, attracted more than 200,000 signatures by Sunday.