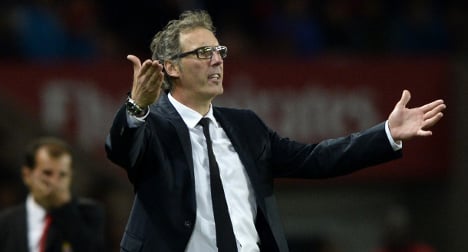 PSG coach Laurent Blanc shows his frustration as his side are held again at home. Photo: Franck Fife/AFP

Paris had been playing out the game after a Lucas Moura 70th-minute strike looked likely to deliver a much needed win to the defending champions.

But fans watched in horror as Brazil defender David Luiz lamely tapped the ball into Martial's path deep into injury time and the 18-year-old made no mistake.

"This is a bad habit and we have to stop it," said PSG's France international Blaise Matuidi. "We didn't get out of the game what we put into it."

Runaway leaders Marseille now have 22 points after their seventh straight win Saturday, 2-1 away at Caen, Bordeaux, who lost 1-0 at Reims, have 17 points while PSG, Lille and Nantes are all on 15.

The game had seemed set for a 0-0 deadlock with PSG drained from a thrilling 3-2 win over Barcelona in the Champions League midweek and Monaco having earned a hard-fought draw at Zenit St Petersburg also jaded.

But an unmarked Moura side-footed home from the edge of the six-yard box in the 70th minute after fine work from man-of-the-match, Argentine midfielder Javier Pastore.

"It could have been worse for them because we had the best chances," claimed Monaco coach Leonardo Jardim.

The first half was uneventful until Maxwell's cross on 37 minutes went begging as a sluggish Edinson Cavani arrived slightly late for a simple nod in.

PSG were left to thank Salvatore Sirigu's reflexes after he then finger-tipped a Yannick Ferreira Carrasco snap-shot onto the crossbar on 43 minutes to hold the score to 0-0 at half-time.

Veteran Zoumana Camara and Luiz were kept busy, but were never panicked by the Monaco forward line.

Pastore put Cavani in just before the hour with a deft through ball only to see the Uruguayan run through with perfect timing and miss the ball completely.

Defender Andrea Raggi thought he's scored a few moments later but Gregory Van Der Weil appeared from nowhere to clear off the line with Sirugu on the floor.

Earlier Sunday Lyon cruised to a 3-0 victory over Lille at their Stade Gerland thanks to a hat-trick from France international striker Alexandre Lacazette.

Lille had to play without eight first choice players and also had their coach Rene Girard sent off for the second time this season.

They have now lost twice and drawn one of their last three league games.

For Lyon, former France player of the year Yoann Gourcuff finally got a place in the starting line-up as his form comes back and he set up the first goal for Lacazette in the 39th minute.

The 23-year-old striker with three France caps took his league tally to seven with another strike just on half-time and his hat-trick put the gloss on a fine days work when he wrapped up victory with six minutes to play.

Saint-Etienne could have climbed to second place above Bordeaux with a home win but lost 1-0 at home to Toulouse thanks to Wissam Ben Yedder's sixth Ligue 1 goal this season.

Saint Etienne have suffered two defeats and a draw in their last three league outings.

Also Sunday Nantes teenager Georges-Kévin Nkoudou grabbed the winner that took the Canaries up to fifth after edging Guingamp 1-0 in the Brittany derby.