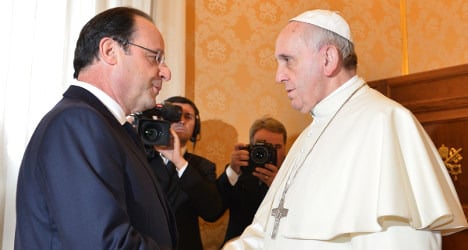 Pope Francis is coming to France next year. Photo: AFP

The official confirmation of the 2015 visit to Paris and Lourdes is to come on Tuesday, which is when the schedule for the pope's visit next month to European Union institutions in Strasbourg is to be released, reported Catholic daily La Croix.

The pope decided not to carry out a wider French visit during his November 25th stopover in Strasbourg, but promised to return at a later date.

"He promised the French Church that his visit would happen in 2015 or early 2015," Monsignor Grallet wrote on the Diocese of Strasbourg website.

As long as Francis's visit happens as planned, it will be the ninth time a pontif has made an official stop in France. Seven of those visits were from Pope John Paul II in the 1980s and 1990s.

French president François Hollande visited the pope in Rome in January amid deep divisions in France over hot-button issues including abortion and gay marriage.

After legalising gay marriage, softening laws on abortion, vowing to explore a change to euthanasia and allegedly being caught having a fling, Hollande could have found himself in a tough position with the pope.

Francis has largely avoided public diatribes on Church doctrine but Vatican watchers expected him to press the Socialist leader on issues including changes to abortion legislation and a drive to legalise euthanasia.

But probably the most jarring occurrence during the visit was the detonation of a small explosive device outside a French church, which was suspected to be linked to Hollande's visit.

Many saw Hollande's trip as a means to curry favor with the estimated 38 million Catholics in France. Though France is a highly secular country, its population of Catholic believers is among the top 10 largest in the world.