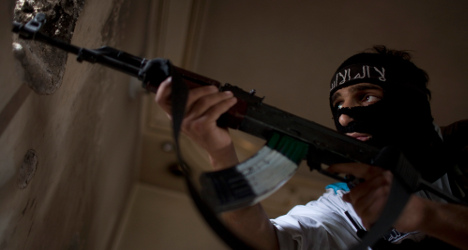 A US press reports claims a French intelligence agent has joined the enemy. Photo: JM Lopez/AFP

A former French intelligence officer who defected to Al Qaeda was targeted by US strikes in Syria last month, US press group McClatchy said, in a report almost immediately denied by Paris.

According to the report, European intelligence sources describe the former agent — who allegedly defected from either French military intelligence services or the country's foreign spy agency the DGSE — as the "highest ranking defector ever to go over to the terrorist group."

The article adds that the man, who reportedly joined Al-Qaeda in Afghanistan and went to Syria, was one of the targets of a round of US strikes in the war-torn country aimed at the Al-Nusra Front, Al-Qaeda's Syrian affiliate.

The United States has launched air strikes over Syria and Iraq as part of a multi-country coalition fighting jihadists in both countries — mainly those belonging to the radical Islamic State group that controls swathes of territory.

France's defence ministry denied any of its former agents was involved.

"The report that the person allegedly belonged to the defence ministry's intelligence services is completely and utterly wrong," a ministry official told AFP.

The DGSE, meanwhile, refused to comment, as did France's foreign ministry.

According to the McClatchy report, this alleged former officer is an expert in explosives and is still alive despite the air strikes.