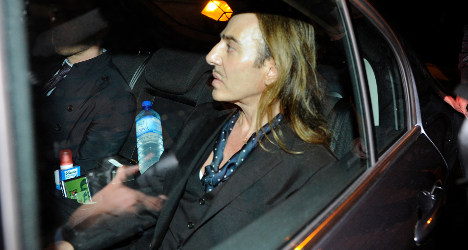 After a spectacular fall, designer John Galliano is back. Photo: Bertrand Guay/AFP

Disgraced British designer John Galliano is to restart his shattered career by taking over the creative direction of the fashion house Maison Martin Margiela, the label said on Monday, three years after he was sacked by Dior following a drunken anti-Semitic tirade in a Paris bar.

Galliano, 53, who spent nearly 15 years at Dior, is widely considered to be one of the most brilliant fashion minds of his generation.

The designer has been rarely seen since being convicted in September 2011 of anti-Semitism for hurling abuse at people in a bar in Paris' Jewish quarter.

The Paris criminal court found him guilty of proffering anti-Semitic insults in public — an offence under French law — on two occasions in February 2011 and October 2010.

Although he faced a maximum of six months in jail, he received a far lower sentence with suspended fines totalling €6,000 (8,400 dollars) after the court accepted he was sorry for his actions which he blamed on drink and drugs.

"John Galliano is one of the greatest undisputed talents of all time — a unique exceptional couturier for a maison (house) that has always challenged and innovated the world of fashion.

"I look forward to his return to create that fashion dream that only he can create," he added.

According to WWD, Galliano will take over all lines at Margiela including couture and both women's and men's ready-to-wear collections.

The fashion industry has been awash with speculation in recent months about Galliano's future although Rosso last month denied rumours that he was to join the house.

The Italian industrialist, nevertheless, made no secret of his admiration for Galliano's talents.

"Who wouldn't like to work with him? If he ever got back his name, I would be the first to produce his collections," WWD quoted him as saying in September.

Galliano underwent treatment for drug and alcohol abuse at an Arizona rehabilitation centre following the scandal.

He later told a magazine he had been sickened to see the video evidence against him, insisting he was baffled by the drunken rant.

"It's the worst thing I have said in my life, but I didn't mean it… I have been trying to find out why that anger was directed at this race (the Jewish people)," he told Vanity Fair magazine.

"I now realise I was so… angry and so discontent with myself that I just said the most spiteful thing I could."

Since his fall from grace, Galliano has been almost entirely absent from fashion, apart from a three-week designer-in-residence role at Oscar de la Renta's workshop in New York in 2013.

Then, in May this year, he reappeared in Moscow as the creative director of Russian cosmetics chain L'Etoile.