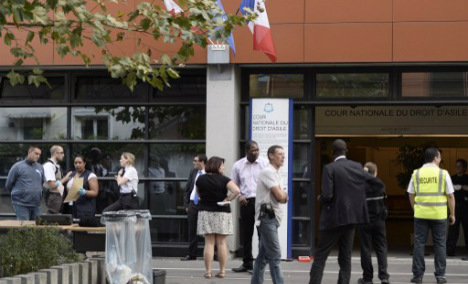 Staff gather outside the court in Montreuil. Photo: AFP

The 38-year-old man, who was carrying a bottle, doused himself with petrol before setting himself on fire and suffered serious burns to his scalp and torso.

Pascale Girault, the secretary general of the National Court of Asylum, said the man's first demand for asylum was rejected by the Office for the Protection of Refugees and Stateless People (OFPRA) a few months ago.

"He filed an appeal which was rejected" by the court, Girault said.

On Friday the man returned to the asylum court in the eastern Parisian suburb of Montreuil "for information on how his situation could be re-examined."

When staff at the front desk explained the decision he "doused himself in fuel and set fire to his clothes," said Girault.

Security guards used a fire extinguisher to put out the flames, said a police source.

In theory a request for asylum cannot be examined a second time unless the person furnishes new information, said a spokesman for OFPRA.

A police source said the man had arrived in France via Syria.

"He was two metres from the front desk, looked at the notice board and doused himself with a large bottle filled with a transparent liquid," said Maya Lino, who witnessed the scene.

"His eyes were glazed. He pulled out a lighter, tried a first time, it didn't work and everyone screamed," she added.

"He tried again a second time and burst into flames all the way to his head. He began running."

Every year some 40,000 asylum seekers appeal to the court after their cases are denied by OFPRA.

If the court rejects an appeal, the asylum seeker is usually expelled from France.

"Often the decisions of the court are perceived as dramatic and I understand that because they can end someone's life plans," said Pierre Henry, director of an organisation which supports asylum seekers.

"But this was a desperate act, which fortunately is an exception. We should put our feelings aside and not exploit this tragedy to challenge an entire process," he said.

Of the 38,540 decisions taken by the court last year, 108 concerned Chadians. It found in favour of only 17 of these applicants.