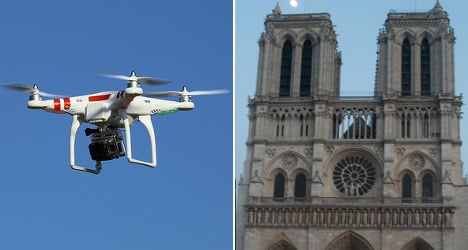 A tourist got in big trouble for filming a Paris monument with a drone. Photo: Ktee1086/Matthew Black/Flickr

An Israeli tourist who was arrested in front of the Notre Dame Cathedral while flying a drone above one of Paris's main attractions, was slapped with a €400 ($500) fine on Thursday, after spending the night in jail.

The 24-year-old tourist had launched the drone, equipped with a Go-Pro camera, above the famous Gothic church on Wednesday morning, and sent it hovering over the historic Hotel Dieu hospital and a police station, a police source told AFP.

The source said the drone had been spotted on police surveillance cameras. When officers arrived on the church square, the tourist said he was not aware flying a drone in Paris was illegal.

The Israeli said he had simply wished to film all Parisian monuments "exclusively for private purposes," said the police source.

After spending the night in jail he was issued the stiff fine for "operating an aircraft non-compliant with safety laws", said a judicial source.

He's the latest in a string of amateur drone pilots to end up in hot water for filming France's monuments using one of the devices.

A member of the French Foreign Legion was held by police in February after making a video of the Eiffel Tower using his drone.

He had reportedly been flying the drone measuring half a metre by half a metre around the first floor of the tower when he was arrested on suspicion of "endangering the lives of others".

It’s the exact same charge that was levelled against a French high school student who got in big trouble after using his drone to make an aerial film of the historic sites in the eastern French city of Nancy.

“Nancy seen from the air” (Nancy vu du ciel) is the stunning short film put together by 18-year-old Nans Thomas quickly which racked up some 400,000 views after it was posted on the online video sharing site Vimeo.

But unfortunately for the teenager his success also caught the eye of French civil aviation authorities, who ordered an investigation, TF1 TV reported. It turns out the teenager violated two key provisions of the law according to Nancy’s top prosecutor Thomas Pison.

“If the aircraft crashed in a densely populated area, the consequences can be tragic,” Pison told Est Republican. “The use of drones also raises the question of respect of people’s privacy.”

Here's the teen's stunning video of the stunning of Nancy seen from the air: