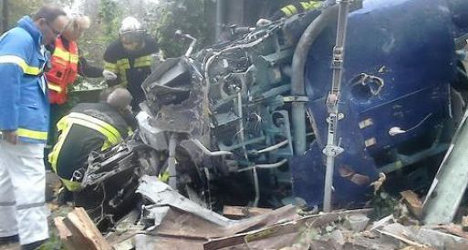 Five Swiss died and two more were injured on Thursday when their helicopter "fell like a stone" and crashed in France, only a few metres away from a house, French officials said.

The EC130 helicopter came down in the garden of a suburban house near the city of Montbeliard, some 13 kilometres (8 miles) from the Swiss border, French police said.

One of the victims still alive was rushed to a local hospital with multiple injuries, the other was taken by medical helicopter back to Switzerland.

The group were members of a Swiss business federation on their way to visit a Peugeot factory in France, said Pierre Genzi, head of the local construction association that invited them.

The helicopter had taken off from the airport of Lausanne in Switzerland, and the crash took place a few hundred metres from the Montbeliard aerodrome.

The cause of the accident was not immediately known. Officials rushed to the scene to coordinate emergency services. There were more than 70 fire service personnel and police at the scene.

The seven people on board, who have not yet been identified, were six men and one woman aged between 45 and 63.

Local mayor Pierre Schlatter said that witnesses had told him the helicopter "fell like a stone."

With only a few minutes before it was due to land, it dropped "only a few metres away" from the house, added the mayor.

One of the inhabitants in the house was having breakfast when the crash happened.

"All of a sudden, there was a loud noise, a whistling, as if there was a gas leak," said 29-year-old Loic Schmidt.

"It crashed into a chicken coop which is where I keep my wood … I called the fire brigade and I went out to see," he added.

"There were at least two people crying 'Help! Help me!' They were buried under the machine. All I could do was to tell them that help was on its way," said Schmidt.

The house and garden now reeks of aviation fuel and the family had to evacuate the house briefly before being allowed back in.

Rescue services said the weather conditions were good at the time of the crash.