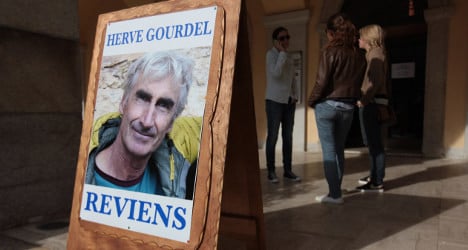 Algeria has identified suspects in the kidnapping and beheading of French tourist Herve Gourdel, the justice minister said on Tuesday, as the North Africa country widened its probe into the brutal execution.

Gourdel was seized on September 21 by Jund al-Khilifa, or "Soldiers of the Caliphate," a group linked to the Islamic State jihadists, while trekking in a national park in eastern Algeria.

The 55-year-old mountain guide was beheaded, in a video posted online  last Wednesday, after France rejected the kidnappers' ultimatum to halt anti-IS air raids in Iraq.

"The preliminary investigation has identified certain members of the terrorist group that carried out this crime," Tayeb Louh said on state television.

The investigation into Gourdel's abduction and killing was handed over Sunday to a judge at an Algiers court specialising in terrorism and organised crime, the minister said.

Prosecutors have sought an arrest warrant for the identified kidnappers and demanded an investigation to determine the location where the video was posted online, said the minister.

A probe has also been ordered to identify other members of Jund al-Khilifa.

The beheading followed France's rejection of the group's 24-hour ultimatum to halt air raids in Iraq — part of a US-led campaign against IS.

It came after three other Western hostages – two US journalists and a British aid worker – were beheaded by the jihadist group.

French jets carried out their first air strike against Islamic State militants in Iraq on September 19, destroying a logistics depot.

Paris opposed the 2003 invasion of Iraq but was one of the first to sign up for an active role in the US-led campaign against IS.

It has six Rafale fighter jets and just under 1,000 soldiers based in the United Arab Emirates.

The abduction and execution of Gourdel sparked global condemnation and an outpouring of grief in his homeland.