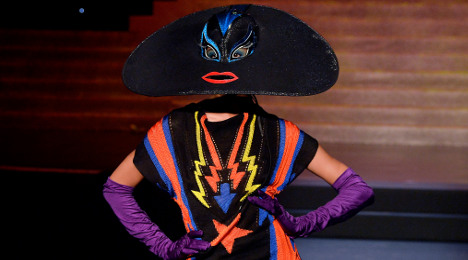 Was Mexican wrestling-style masks one of the trends to emerge from the Paris Fashion Week? Photo: Miguel Medina/AFP

The Paris fashion shows wrapped up Wednesday with yellow, wide-legged trousers, transparency and 1970s-inspired looks among the catwalk trends likely to be winging their way towards the high street for spring/summer 2015.

The highlight of the nine-day fashion marathon was Jean Paul Gaultier's spectacular last ready-to-wear show before bowing out to concentrate on haute couture.

The hottest ticket in town, the show was crammed with Gaultier signatures such as stripes and bodices and topped off with a large dose of his famously wacky sense of humour.

Italy's Giambattista Valli, meanwhile, was elated to have Amal Alamuddin, the new Mrs Clooney, choose one of his couture dresses for her massively photographed postnuptial get-up.

Here are five key trends that emerged from the catwalks: Transparency

Sheer looks were everywhere this season, from Rick Owens and Valentino to Corrie Nielsen and Vionnet. It was all a lot more discreet than the last round of ready-to-wear collections when Vivienne Westwood even had one model flaunt her nipples in a bridal dress.

US designer Owens, whose collection featured a lot of transparent looks, explained that his objective was always "bareness with modesty" when using sheer fabrics. "I try not to have too much transparency over the bust. I don't like flashing a lot — but I love skin," he said.
Wide-legged trousers

At Chanel they came in the brand's trademark tweedy fabric, at Chloe it was denim, while Balmain plumped for mousseline and leather. Wide-legged and flared trousers, cropped or in some cases virtually trailing along the floor, look set to make a comeback next season. (Yellow – one of the five trends from this year's Paris Fashion week. Photo: Miguel Medina/AFP)

Paris fashion may not have succumbed to the mass market retail trend for very ordinary-looking clothing known as "Normcore".

But many looks on the catwalks did feature a practical feel. From a hoodie poncho at Chloe to a navy ensemble that looked a touch like hospital scrubs at Celine, there were plenty of very simple pieces that left some critics yearning for a few more fireworks.

Fashion consultant Jean-Jacques Picart told AFP that fashion seemed to have strayed into "a certain banality". But he said the risk was no greater than a few years when fashion went too far in the other direction in a "frenzy of excess".

The balance was likely to be readjusted next season, he said.

Always a good colour for summer, Emanuel Ungaro designer Fausto Puglisi's glamorous one-shouldered yellow gown and blue and yellow prints were among a string of upbeat yellow looks on the catwalks.

It was impossible not to have 1970s flashbacks from one Elie Saab white jumpsuit and some long, floaty dresses with plunging neck lines.