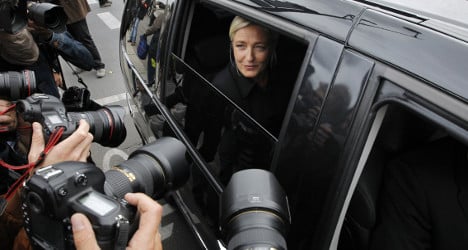 Marine Le Pen had a great weekend after her anti-immigration, anti-EU party won its first ever seats in France’s Senate on Sunday, but she was back in the news on Wednesday for very different reasons.

French Satirical paper Le Canard Enchainé reported that Le Pen has had her driving license revoked due to a run of speeding infractions which had ended with her never settling up with the law firm that defended her in the case.

Her lawyer and National Front party treasurer Wallerand de Saint Just confirmed to The Local on Wednesday that she had indeed had her driving privileges taken away due to traffic violations, but claimed that it was her chauffeur and not Le Pen herself who committed the infractions.

Saint-Just said: “The chauffeur didn’t tell the police afterwards that it was not Ms Le Pen who was driving, so she lost the points automatically and one day she was contacted by the police, who revoked her license.”

The chauffeur allegedly racked up 12 points in Le Pen’s car – the maximum allowed in France – with the driving license being revoked back in 2012.

Saint Just said all the fines came from automatic speed or traffic light cameras and thus the police never actually pulled her over, instead the notices arrived by mail.

Police in France initially assign the blame for driving infractions automatically to the owner of the vehicle, unless they are informed otherwise.

As for the allegations she never settled up the bill, Saint Just claimed it was just a misunderstanding and she paid the €3,000 invoice on Tuesday.

"She just got the notice three days ago and she paid it yesterday," he said. (Pet hatred: One of dad's dogs killed one of daughter's cats. Photo: AFP)

In another story about Le Pen doing the rounds in the French press on Wednesday, it's claimed the reason she recently moved house was because one of her father's Doberman dogs killed one of her beloved Bengal cats.

Le Pen moved out of the Domaine de Montretou in Saint-Cloud to a new property at La Celle-Saint-Cloud.

L'Express magazine claims she made the move because she was so affected by the death of her cat at the hands of one of Jean-Marie Le Pen's dogs, who are kept on the property.

Le Pen's niece, the French deputy Marion, reportedly moved into the vacant property with her family.