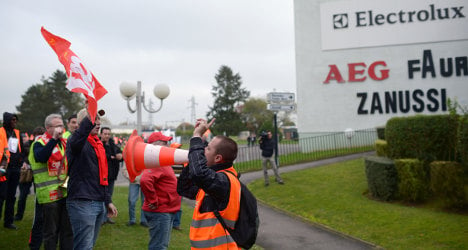 Workers at a vacuum factory in France have threatened to blow it up. Photo: Martin Bureau/AFP

Angry workers at a Swedish-owned Electrolux vacuum plant in eastern France have set fire to a “fuse” in the form of a row of wooden pallets leading up to a 6,000 litre tank of propane.

The workers sparked the flames after talks broke down between management and unions over whether the remaining workers at the site in Revin, which is near the border with Belgium, would be entitled in the future to the same packages as their departing colleagues.

A reporter at the scene snapped this picture of the flames and wrote: "A trail of burning palettes leading to the gas container."

“The 186 workers who remain at the company need to work with the certainty that if tomorrow their factory runs into difficulties, they will be able to get the same benefits as their colleagues," the workers’ union, Force Ouvrière, wrote in a release on Monday.

It sounds extreme, but this explosive bargaining tactic is not totally unheard of in France, which is already known for its workers’ boss-napping stunts.

In 2009 laid off employees rigged up a bomb with propane cylinders at their factory which they threatened to destroy–along with millions of euros in equipment and products–if their demands for better severance pay weren’t  met.

"We are not terrorists or revolutionaries," one machine tool operator told The Telegraph. "We have to defend our rights. We are angry, but nobody will get hurt. We are losing our jobs, and we just want compensation from Renault."

However, some French workers are unwilling to threaten violence and have stuck with the old stand-by of boss-napping. Just this winter workers at a money-losing Goodyear factory slated for closure seized some executives during tense negotiations.

The workers held hostage the bosses for some 30 hours before releasing them unharmed and then immediately occupying the plant in an effort to win better departure packages.

If all this strife seems a bit curious and menacing, one only has to look at the outcome to understand why the unions go to the trouble. By the time the Goodyear workers agreed to departure terms with their bosses, the packages increased to €120,000 per worker or roughly three times the initial offer.