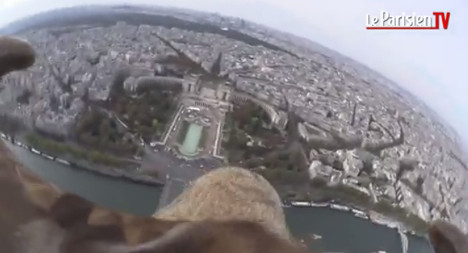 Tourists have been capturing views from the top of the Eiffel Tower for decades but new ground was broken on Sunday thanks to an eagle and a strap-on video camera.

The camera was strapped to the back of a white-tailed eagle named Victor, which was taken up to the third level of Paris's iconic monument.

As it flew back down to the ground as hundreds of onlookers gazed on, it captured a unique view of the French capital.

The stunt was organised by the project Freedom in a bid to highlight the need to protect the endangered birds, which have almost disappeared from Europe over the last 200-years.

Here's the video report below, which is in French, from French newspaper Le Parisien.

It is not the first time a camera has been strapped to the back of an eagle to capture stunning views of France. A stunning video below, which shows a similar bird's eye view of the Mer de Glace glacier near Chamonix in the Alps, went viral when it was posted to the internet last year.

Click on the image below to see the clip.