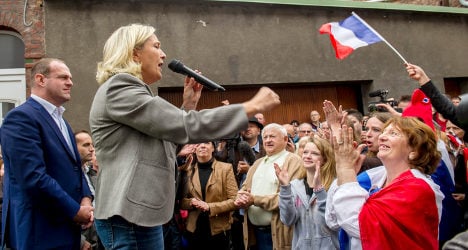 While the National Front just won two seats of the 178 up for re-election on Sunday, it was the first time the 42-year-old anti-immigration, eurosceptic party has entered France’s upper house.

Whatever political muscle those two senators will be able to flex is less significant than the symbolic value of the victory and what it says about the future. It is, after all, the third French election in a row that saw the National Front achieve an historic result.

In the words of Stephane Ravier, one of the successful National Front candidates, this is the last stop before the presidency: "Now there is only one more door to push open, that of the Elysée (presidential palace).”

Speaking after the Senate elections party leader Marine Le Pen was confident enough to spell out her ambitions once again.

"My objective is to get get into power, to be elected president of the Republic," she said.

A recent opinion suggested that if Le Pen faced François Hollande in a run-off vote for the 2017 presidential election, she would come out on top.

However an political analyst with France’s respected Sciences Po institute cautioned that a lot can happen in the two and a half years until the presidential elections.

“2017 is a long way off,” Researcher Bruno Cautrés told The Local on Monday. “It would seem that 2017 will allow the National Front to earn a good score in the first round or even make it to the run-off election. But that’s how it looks now.”

Notably the National Front collected far more votes in the Senate elections than it appeared to have at its disposal.

Sunday’s vote saw more than 87,500 regional and local elected officials nationwide choose their preferred candidate, with only some 1,000 of them National Front-affiliated.

However, the far-right party says it captured 3,972 votes. One explanation for that is elected officials who have no firm connection to any one party tilted toward the far-right candidates.

But another view says traditional right wingers abandoned their candidates for the National Front. The latter is what appears to have happened in certain parts of southern France, including the area around Marseille.

“In these departments the electoral body is well defined. There are few floating voters,” University of Picardie political expert Joël Gombin told French daily Le Monde. “To get so many votes, it’s remarkable. One could not rule out that right party elected officials voted for National Front candidates.”

In May during the European Parliament elections the National Front was the most popular party snagging 25 percent of the vote and capturing a third of France’s 74 seats in Strasbourg.

It was hailed as a big win for Marie Le Pen’s party. But, as the EU Parliament doesn’t directly govern France, it was also seen by many as a means for voters in a low turnout election to express outrage over a moribund economy and scandal plagued political parties.

“It was a totally expected result. French people are fed up with the economy, with struggling to survive and with the politicians,” Rialti Mouair, 29, a waiter, told The Local the day after the vote. “It's been how many years and these politicians can’t get their people out of this crisis. We are fed up, not racist.”

The National Front success in the local elections in March were also historic, seeing the party capture 11 mayorships and some 1,200 seats on town councils across the country.

This victory was viewed as the culmination of Le Pen’s strategy to shed the party’s extremist, racist and anti-Semitic associations. To many the local elections were proof that she’d, at least in part, succeeded.

"We have moved onto a new level," Le Pen said at the time. "There is now a third major political force in our country."

“For some voters, they have tried the left, they tried the right and it didn’t work. And some voters believe it’s time to give Marine Le Pen her chance,” he said.