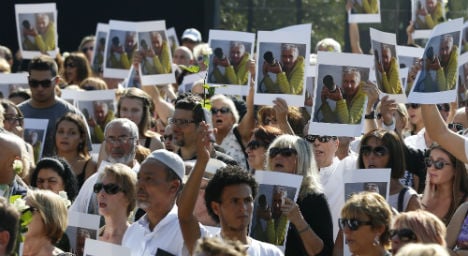 People pay tribute to mountain-guide Herve Gourdel, who was beheaded by Jihadists linked to the Islamic State group in Algeria, during a gathering in Nice, southeastern France, on September 27, 2014.

Gourdel was seized on September 21 by the IS-linked group Jund al-Khilifa, or "Soldiers of the Caliphate", while trekking in a national park in northeastern Algeria.

His beheading, which was posted online in a video Wednesday after France rejected the kidnappers' ultimatum to halt anti-IS air raids in Iraq, drew an outpouring of grief and fury in France.

Carrying 2,000 posters of Gourdel and 1,000 white roses, the cortege of family, friends and well-wishers wove through Nice, the 55-year-old's hometown, to an open-air theatre where a fellow mountain guide paid homage to him.

"We will hold on to the indelible memory of your friendship," Michel Bricola read out in a choked voice, surrounded by a dozen fellow mountaineers.

France is flying flags at half-mast in honour of the mountaineer, who had trained Moroccan mountain guides and worked in the southern Alps.

His murder came after three other Western hostages — two US journalists and a British aid worker — were beheaded by IS.

The beheading drew outrage from prominent French Muslims, who led a rally Friday in Paris against jihadi violence. Anti-racism and left-wing groups have also called for a further demonstration in Gourdel's honour on Sunday.