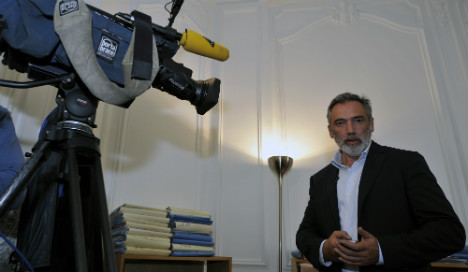 Pierre Le Bonjour, lawyer of one of the three suspected French jihadists, speaks to the media. AFP Photo/Pascal Pavani

The men, who were the subject of a high-profile judicial bungle this week after their arrest in Turkey, were being charged with "criminal association with the aim of planning terrorist acts", lawyer Pierre Dunac told AFP.

They were remanded in custody.

The trio include the 29-year-old brother-in-law of Toulouse jihadist Mohamed Merah, who was shot dead by police after he murdered seven people, including a rabbi and three Jewish children, in a 2012 killing spree.

Their lawyers said the men admit travelling to Syria but deny having fought there and that they were plotting terrorist attacks in France.

Pierre Le Bonjour said his client Abdelouahab El-Baghdadi, who is married to Merad's sister, "understands the need to ask for an explanation about his travels in Syria… But he does not present a danger to France."

Another of the charged men is Imad Jjebali, Merah's childhood friend, who was already convicted in 2009 for ties to a jihadist network in Iraq.

Dunac, his lawyer, said the men travelled to Syria and then "realised over there that it wasn't what they thought it would be, and they fled in order to go home."

The men were initially arrested in Turkey, reportedly on suspicion of being part of a network that recruited jihadists for Syria.

But in a series of glaring mishaps, they were allowed to walk free after arriving in France.

First, French authorities announced Tuesday they had arrested the men upon their arrival at Paris's Orly airport. Then it turned out the men had not flown to Paris at all.

In fact, Turkish authorities had placed them on a plane to the southern city of Marseille, where they were — to their great surprise — able to leave freely after being released from Turkish custody.

In a further bungle, passport control failed to flag the men as suspicious, as a security databank was out of order at the time.

They handed themselves over to police on Wednesday, and were flown to Paris where they appeared before an anti-terrorist judge.

French authorities are wary about nationals who have travelled to Syria and Iraq — where the radical Islamic State controls large areas — and may return to their home country to stage attacks.

After Mohamed Merah's death it emerged that he had visited Pakistan and Afghanistan prior to his attacks and had been on the radar of French intelligence, who had gravely underestimated the threat he posed.

All three men charged Saturday were already subject to investigation in a case opened in September 2013, and which has led to convictions for two others.

That investigation focussed on the so-called "Artigat" network of jihadists named for the village in southern France where they were reportedly based.