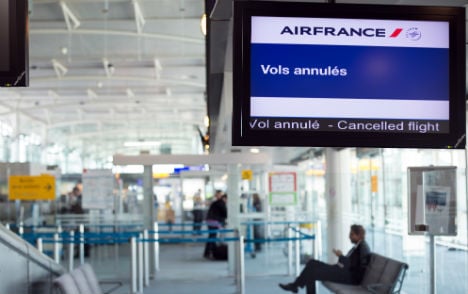 The strike has been branded as "unbearable" by the French Prime Minister. AFP Photo/Bertrand Langlois

The SNPL union, in what it called a "gesture of appeasement", said it was "ready to end the conflict as soon as this mediator is named" by the government.

The French prime minister's office told AFP there were "no grounds for new negotiations with a mediator".

Over half of Air France's planes were grounded for the 12th day running, and the strike was extended until at least Tuesday, after pilots blocked the most recent management proposals to scale back development plans for its low-cost Transavia airline.

The strike at Europe's second-largest flag carrier is costing an estimated €15 million to €20 million ($19 million to $25 million) a day.

Prime Minister Manuel Valls on Friday renewed his call for the "unbearable" strike to end.

"This strike is catastrophic for the French aviation sector," read a joint statement from key industry unions, including those representing travel operators.

Air France's management also rejected the idea of a mediator, and voiced surprise that pilots' representatives had left the negotiating table on Friday while "discussions were going well".

"We aren't far from a solution," said spokesman Eric Schramm.

He stressed however that the company was in an "extremely delicate" situation, losing €20 million each day of the strike.

The protracted strike, and fruitless negotiations, have also prompted anger among aviation staff grounded alongside their planes, around 200 of whom protested against the stoppage on Friday.

A concession from management to scrap plans to expand Transavia further into Europe was "necessary… but not enough" to stop the strike, SNPL spokesman Guillaume Schmid said on Friday.

Schmid later called on the government to name an "independent mediator as quickly as possible".

He blasted Air France-KLM chief executive Alexandre de Juniac for "his inability to carry out a respectful dialogue" with the unions.

The pilots are fighting for a "single contract" across Air France-KLM's subsidiaries to avoid being forced to accept less attractive working conditions at Transavia.

Transavia currently serves holiday destinations across Europe and the Mediterranean.

Air France pilots, who earn up to €250,000 a year, fear some flights will be replaced with services operated by Transavia.

They fear they will end up earning less and having shorter recovery times between flights.

A Transavia captain earns up to €160,000 a year, although co-pilots on both airlines will earn roughly the same amount as each other at the beginning of their careers, according to sources.

While Air France management agreed to scrap the development of Transavia abroad, it has vowed to maintain at least some part of its plans to enter the
low-cost market, a key "growth opportunity", according to de Juniac.

The Air France-KLM board of directors has thrown its support behind management.

The withdrawal of plans to expand Transavia will come as a blow to the airline's efforts to be more competitive in the crowded and changing European skies, increasingly dominated by no-frills operators such as Irish airline Ryanair.

The union action is "again dragging a company into the red", said MEDEF vice-president Jean-Francois Pillard.

"Low-cost airlines now represent between 25 and 45 percent of air traffic in Europe, depending on the country," said Didier Brechemier, an aviation expert at consultants Roland Berger.

Ryanair will soon expand its fleet to 400, which would take it above Air France's 350 aircraft.

"With competitors like that it's not hard to see why Ryanair is the fastest-growing airline in Europe," company boss Michael O'Leary said dismissively of Air France's offer to put its expansion plans on ice.