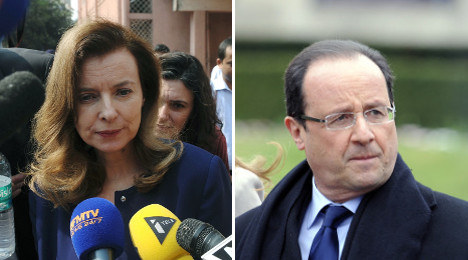 She may have lost out in the love stakes, but when it comes to money Trierweiler has beaten Hollande it seems. Photo: AFP

Trierweiler may have been unceremoniously dumped by the French president, but perhaps she has had the last laugh after all.

As well as humiliating her ex with the publication of her book 'Thank you for this Moment' (Merci pour ce Moment), it now appears Trierweiler is richer than her former partner.

According to The Telegraph, the 442,000 copies the book has sold in under a month have netted the ex-'First Lady' about €1.3 million in profit.

While Hollande’s wealth, as disclosed on government declarations, was €1.17 million.

It could be seen as a sort of materialistic settling of scores because Hollande, France's historically unpopular president, was accused in the book of mocking Trierweiler for her humble origins. Though she went on to become a glamorous Paris Match writer, she started life in a social housing project in western France.

She claimed Hollande called her ‘Cosette’, an impoverished orphan from Victor Hugo’s 'Les Miserables' and mocked her family by noting they were "not a pretty sight".

Of course that pales in comparison to the furore provoked by the book’s allegations that France’s Socialist president, "a man of the people" referred to the country’s poor as “the toothless” in private.

The book, which details Trierweiler's life in the presidential palace, came less an year after Hollande dumped her for actress Julie Gayet whom he had been having an affair with.

Though Trierweiler was roundly criticized in the press and public opinion polls for penning a book that degraded the position of the presidency and dished up an international embarrassment for France, people are still buying the book.

Sales are brisk on Amazon and English translations of the book are reportedly in the works.