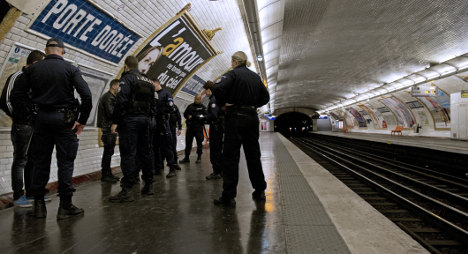 French intelligence chiefs say there is no plan to target the Paris Metro. Photo: Alain Jocard/AFP

The move came after the Iraqi Prime Minister Haîdar al-Abadi said authorities in his country had “credible” intelligence that the Isis terror group plans to target the Metro systems in both Paris and New York.

Abadi claimed he had received information from militants captured in Iraq. Deciding it was credible, he said the attacks were being plotted from inside Iraq by networks linked to the Isis group.

“They plan to stage attacks in the metros of Paris and the US,” Abadi told a small group of reporters while in New York for the annual meeting of the UN General Assembly. “I asked for more credible information. I asked for names. I asked for details, for cities, you know – dates. And from the details I have received, yes, it looks credible.”

The comments clearly took intelligence chiefs in both France and New York by surprise.

Later on Thursday France’s General Secretariat for Defence and National Security released a statement saying: “At this point in time the intelligence services do not hold any information allowing them to confirm” such a threat against the Metro.

Authorities in New York also denied the existence of a terror plot to target the city’s Metro system.

Earlier this week militants from Isis called on jihadists to launch attacks against the “spiteful and dirty” French in revenge for its participation in air strikes against Isis targets.

Earlier on Thursday the French government announced that it was beefing up security in public places and on public transport in response to the kidnapping and beheading of French tourist Hervé Gourdel in Algeria.

However authorities denied these measures were in response to any specific terror plot they had become aware of.

France has not moved to raise its national security warning system to the highest level, out of fear they will simply increase anxiety among the public, which is exactly what Isis aims to do.

In 1995 the Paris Metro and RER train system were targeted in attacks by the terrorist organisation Armed Islamic Group (GIA), linked to the Algerian civil war. The attacks killed eight people and left more than 100 injured.