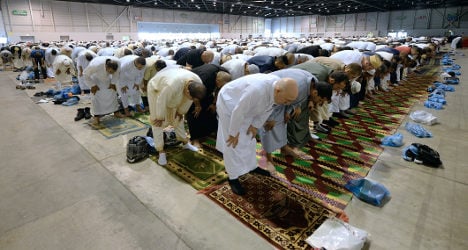 Muslim groups plan to hold a demonstration outside Paris's main mosque Friday to denounce the "barbarism" of Islamic State militants, as flags fly at half mast after the beheading of a French national.

The demonstration comes as France is engaged in air strikes in Iraq. The government also promised more support for Syrian opposition forces, as the country mourns the murder of hostage Herve Gourdel by jihadists.

President Francois Hollande pledged "determination, composure and vigilance" in the face of threats issued by IS militants sowing terror in Iraq and Syria.

He announced flags nationwide would be flown at half-mast for three days from Friday to mourn the mountaineer murdered in Algeria.

The abduction of Gourdel on Sunday in the restive east of Algeria and his subsequent execution at the hands of IS-linked Algerian group Jund al-Khilifa, or "Soldiers of the Caliphate," sparked global outrage and an outpouring of grief in France.

In an unusual move, the head of the French Muslim Council (CFCM) Dalil Boubakeur called on Muslims to gather outside the Paris Mosque on Friday afternoon to denounce "the horrific and bloody barbarism of the (IS) terrorists".

Earlier this week, the IS group issued a chilling threat to all members of the Iraqi campaign, urging militants to "kill a disbelieving American or European — especially the spiteful and filthy French".

In response, the French presidency announced Thursday that security in public places and on transport would be strengthened.

The foreign ministry widened its vigilance alert for nationals abroad from around 30 countries earlier this week to some 40 nations — including Indonesia, Malaysia and the Philippines.

Leading French Muslim figures signed a message run in Friday's Figaro daily proclaiming solidarity with the victims of IS and proclaiming "We are also 'filthy French'".

There were also calls on social media for displays of solidarity in several other French cities, including Nantes and Lyon.

Kamel Kabtane, head of the Lyon mosque said he plans a large interfaith gathering on October 1st "to oppose violence wherever it emanates from".

In the small, southern Alpine village of Saint-Martin-Vesubie where the 55-year-old Gourdel worked as a mountain guide, distraught locals and friends took part in a silent march late Thursday. They spoke of him with fondness, some with tears in their eyes.

Speaking at a cabinet meeting, Hollande urged "national unity" during the crisis, according to government spokesman Stephane Le Foll, who also announced France had carried out air strikes in restive Iraq on Thursday morning — the second bombing raids in the space of a week.

Paris opposed the 2003 invasion of Iraq but was one of the first to sign up for an active role in the US-led campaign against the IS group.

It has six Rafale fighter jets and just under 1,000 soldiers based in the United Arab Emirates. On Friday, France carried out its first air strike on IS targets in Iraq, destroying a logistics depot.

While it has pledged to push forward with air strikes in Iraq, Paris has stressed it will not deploy ground troops, nor will it expand operations to Syria, as the United States has done.

US, Saudi and Emirati warplanes bombed oil installations in eastern Syria overnight in a bid to cut off a significant source of funding for the IS group.

But the presidency announced France would "continue and intensify its support for Syrian opposition forces who are fighting jihadist groups".

Back in Gourdel's home town of Nice, residents came to grips with the violent end of one of their citizens.

The mayor of the French Riviera resort, Christian Estrosi, visibly moved, told reporters that the country had been plunged into "national mourning", after he met Gourdel's relatives late Wednesday.

"It's a terrible shock" for the parents, he said, adding that the family had reacted to Gourdel's death "with dignity, anger and an unspeakable pain".

In a statement, his relatives asked that gatherings planned across France in memory of the mountaineer be held "with dignity and restraint."

The mountaineer was kidnapped while hiking in a national park in eastern Algeria that was once a magnet for tourists but later became a sanctuary for Islamists.

A passionate photographer, Gourdel liked going off the beaten track, though he was always careful, his friends said.