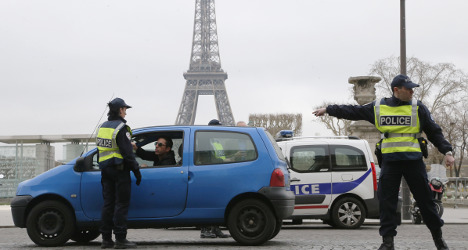 Paris officials want to force cars with odd-numbered license plates off the road on Friday in order to get a handle on a worrying spike in air pollution.

They would have to get the government’s approval and on Thursday afternoon there was no word yet on whether they would get it.

Approval would mean the same restrictions would be in place as during the air quality crisis in March. Drivers with plates that ended with an even number were allowed to drive one day and odd-number plates were authorized to hit the road the next.

The inconvenient restrictions are only legal when the levels of PM 10 — small particles which easily penetrate the lungs — exceed 50 microgrammes per cubic metre for three straight days.

A lack of wind and rain as well as cold nights followed by balmy days are usually the cause of the poor quality air. Exhaust from cars, heating in buildings and factory emissions were also contributing to the problem.

While forcing a good portion of the city’s cars off the roads is a hassle for drivers, it would come with the promise of free public transport for everyone. Also not everyone would be expected to abide by the restrictions.

Electric, hybrid and natural gas-powered cars are exempt, as are those carrying at least three people and vehicles driven by people in certain professions like medicine, journalism and business representatives.