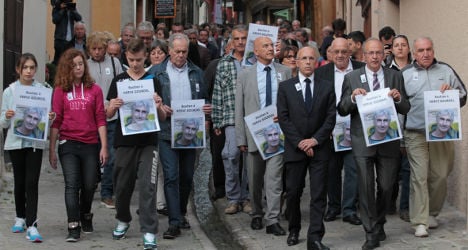 A day after Islamic militants linked to Isis beheaded a French hostage over France’s air strikes in Iraq, the country's outrage was continuing to build as was its resolve to confront the heavily-armed extremists.

Members of France's Muslim community have been some of the most vociferous in condemning the beheading of the hostage Hervé Gourdel as well as calling for united efforts to stop the Isis militants, who have seized large swathes of Iraq and Syria.

“They aren’t Muslims, the people who did this. They don’t even know how to pray,” Madiaba Draora, 33, a Muslim labourer, told The Local on Thursday. “These people are dangerous to everyone, no one is safe.”

His feelings have been echoed by Muslim leaders across the country.

“I’m furious, I’m angry at these criminals, these murderers from a group called Daesh, Islamic State, but which has nothing to do with Islam, nor any religion,” Abdallah Zekri, a leader of French Muslim group Conseil Français du Culte Musulman, told Europe 1 radio.

A collective of prominent Muslims wrote an open letter in French daily Le Figaro on Thursday declaring their love of France and their repulsion at the killing.

"We, Muslims of France, can only express repulsion and denounce with all our energy the abominable crimes perpetuated in the name of our religion, of which the founding principles are peace, mercy and respect for life," their letter said.

Muslim leaders have called on their community to protest against Gourdel’s beheading at Paris’s Grand Mosque on Friday.

Outside of the Muslim community, on the streets of Paris opinions were divided over France’s participation in the international coalition targeting the Islamic militants, despite the anger over the beheading of Gourdel.

Marilyne Werner, who works for a tourist boat company, said she’s horrified by the beheading and all the killings carried out by the militants. But she wonders if bombing will fix anything.

“It’s an escalation, it pushes things to the next level,” she said. “And then when they start dropping bombs the militants disappear. But the civilians can’t get away and maybe one of those bombs lands on them.”

“So is that the right thing to do?” she asked.

Jean-Charles Guichardot, 27, told The Local: “I’m really not convinced this is going to work or that it is going to change anything. Is bombing the best way to do this?" he said.

Still the killing had left Guichardot’s family rattled. His father has cancelled a motorcycle trip to Morocco after the attack, deeming the planned cruise around the country’s back roads near the Algerian border too risky.

“I’m afraid to think it and I don’t want to be afraid,” he said. “I find it sad. I don’t think being afraid is a solution to anything.”

This kind of fear and the negative impact it will have on the tourism industry in North Africa could only encourage more violence, said Leo Matthieu, a 20-year-old student.

On Thursday France announced that it was boosting security in public places and on public transport in response to the increased threat to its nationals.

Despite the increased anxiety among the government there was still plenty of support for the air strikes on the streets of Paris.

“I read on Facebook that the killing was a result of France’s foreign policy and I think that’s wrong,” said Meredith a 24-year-old law student who declined to give her full name.

She believes France must resist forces that want to undermine its values and the country needs to take a leadership role on the world stage.

“Is the life of one Frenchman more valuable than a whole community? No, I don’t think so,” she said. “France is an important country and it must defend the ideals of the republic.”

She was not alone in believing France needs to intervene in order to stop a threat to its ideas and innocent civilians.

“It’s barbarism, this killing. We can’t let this go on for another minute,” said an 81-year-old retired cook who refused to give his name. “I’m behind François Hollande. We must act.”

The man added: “He (Gourdel) was absolutely innocent and unaware. He didn’t deserve this.”