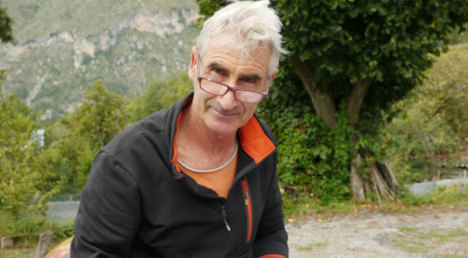 Hervé Goudel, who was beheaded in Algeria this week after being taken hostage by jihadists. Photo: AFP

The beheading of French tourist Herve Gourdel by jihadists in Algeria drew in France and across the globe with Hollande blasting the "cruel and cowardly" killing.

Gourdel was seized on Sunday by IS-linked group Jund al-Khilifa, or"Soldiers of the Caliphate," while trekking in a national park in Algeria.

His beheading, which was posted online in a video, came after France rejected the kidnappers' 24-hour ultimatum to halt anti-IS air raids in Iraq.

Speaking at the United Nations on Wednesday Hollande said his country would stay the course in the fight against the jihadists.

'France will never give in'

"France is going through an ordeal through the murder of one of its citizens, but France will never give in to blackmail," he told the UN General Assembly.

“France will never give in to terrorism because it is our duty and above all, it is our honour,” said Hollande. "The fight against terrorism must continue and be stepped up," he said.

Hollande also called on French nationals living abroad to take extra caution to avoid being targeted in the same way as Gourdel.

The president was due to hold a crisis meeting on Thursday morning with ministers.

Prime Minister Manuel Valls turned to Twitter to express his outrage. "The support of the whole nation goes to Herve Gourdel's family. France will never give in," he wrote.

France’s interior minister Bernard Cazeneuve added: "We are in shock. This kind of act is barbaric in the extreme. France is not afraid, because France must not be afraid.”

Politicians from across all sides lined up to condemn the murder, all vowing that France must not waver in the face of terrorist threats.

Hervé Morin from centre right UDI party tweeted: “To Gourdel’s murderers: You are monsters and you are hideous.”

The National Front’s Louis Aliot said: “All my thoughts are with the family of our compatriot, cowardly executed by the enemies of our civilisation.”

There was also emotion in the south of France where Gourdel was from.

Emotions ran high in his home town of Nice after news of the murderbroke, with flags in the city flying at half mast.

The deputy mayor of the French riviera resort, Christian Estrosi, visibly moved, told reporters that the country had been plunged into "national mourning" after he met with Gourdel's relatives late on Wednesday.

"It's a terrible shock" for the parents, he said, adding that the family had reacted to Gourdel's death "with dignity, anger and an unspeakable pain".

Nice resident Odile, who did not know Gourdel personally but lives near hisbuilding, said she was "disturbed" by his death. "I'm very surprised to see this horror that we are finding ourselves in," she said.

Further north in Saint-Martin-Vesubie, where Gourdel worked as a guide in the Mercantour national park, mayor Henri Guige said he was "shocked". "For me, this is a war in which they are attacking civilians, the innocent," he told AFP.

The news of Gourdel's beheading was also met with anger around the world where gloabal leaders expressed their resolve to continue to fight terrorism.

Voicing solidarity with France, US President Barack Obama said: "We stand with you and the French people as you grieve this terrible loss and as you stand up against terror in defence of liberty."

The European Union said the killing was "a further demonstration of the determination of groups affiliated to (the IS group) to pursue and extend their terror strategy".

No effort must be spared to hold the perpetrators accountable for the "barbaric murder", it added.

The Algerian government, which had mobilised troops to scour the mountains for Gourdel, condemned the "hateful" murder.